Roger Federer: Winning big at the beginning and end 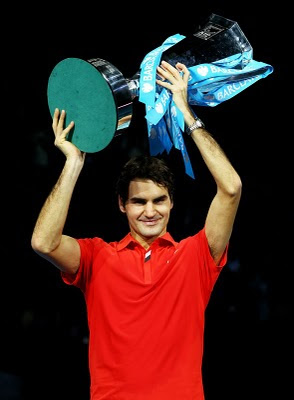 Talk about a roller coaster ride for Roger Federer! 2010 definitely was that.

Back in January, after he won his 16th career Major at the Australian, it looked like nothing would stop him. But then came all those title-less months, that included losses to Tomas Berdych (twice!), Robin Soderling, Marcos Baghdatis, Albert Montanes ... I'd say things were looking kind of grim--and I bet a lot of other folks would, too.

But then Federer ended up righting the ship after Wimbledon, and while he didn't win the U.S. Open, he did pick up four titles in the last half of the season including a nice-sized one yesterday at the ATP World Tour Finals. He ran through his first four opponents there before stopping Rafael Nadal in a three-setter. It's always impressive when you're beating single-digit-ranking dudes all in a row like that--a perfect way to end the season for the legend.

And because I'm such a big man and can admit my mistakes (actually, I'm only doing this before someone out there calls me on it!) I'd like to give props to the work Paul Annacone has done, after knocking Federer for bringing him aboard. I still think it'll be interesting to see how Fed approaches the clay-court season next year, but that's a story for another day. Let's let the guys enjoy this one!

Andy Roddick and the distraction factor 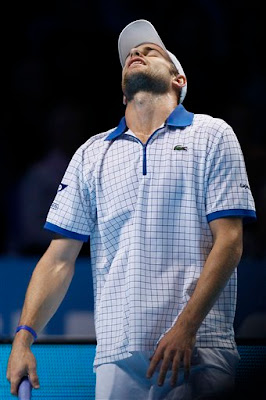 Just wondering, how many times over the past few years have you seen stories after Andy Roddick losses that include the phrase, "Roddick, who was bothered by ... "?

Whether it's bad calls, lack of lighting, wrong feet called on foot faults or flickering ad lights, when those distractions happen, it seems you rarely hear of him overcoming them.

But just because I always like to think of "what ifs," maybe if he did, he would be a three-time U.S. Open champ, a French Open semifinalist or after this latest incident at the World Tour Finals, a player with a good chance of advancing instead of being one with a great shot at going home early.

Granted, the flickering lights must've really sucked, but man, let it go! Ask for them to be cut off, then dust Berdych--easy as 1, 2, 3! I'm just kidding; it's never that easy. But this group was actually set up great for Roddick, particularly the way he's played against Berdych and Novak Djokovic over the years.

If you're a regular reader here, then you know I'm a big Roddick fan and I'm not trying to bash him. I just wish the distractions didn't play such a big part in stunting his results. Now that he's older, all focus needs to be on the game if he wants to pick up that extra U.S. Open title or be a threat at the French or a semifinalist at a World Tour Final.

No drama with Murray-Soderling? Look again! 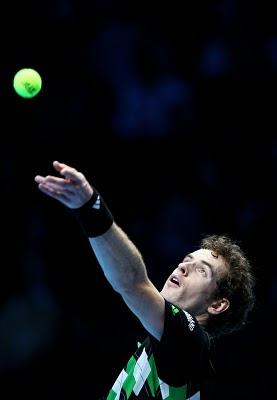 Well, here we are: World Tour Finals time! This is the finish line for everyone on the season except Novak Djokovic, who still has Davis Cup duty to attend to.

While the first day of action was pretty straightforward, there was an interesting result: that being Andy Murray defeating Paris Masters champ Robin Soderling pretty easily. It's funny to think that an opening match could have a big impact on the rest of the tournament, but I feel that was the case with this one. No offense to David Ferrer, but the other players in Group B must feel that he's a gimme. Then you have Roger Federer in there, who's absolutely the opposite of that. So you're left with the winner of the Murray-Soderling match having a good shot at the semis, and Murray came through it.

Now, I'm not saying anyone should actually pack their bags because that's just not what you do, but Soderling has an extremely tough task ahead of him. Should make for interesting viewing in the days ahead when it comes to him.

(And props to Murray for rockin' the Lendl gear!)

How far can Robin Soderling go after Paris? 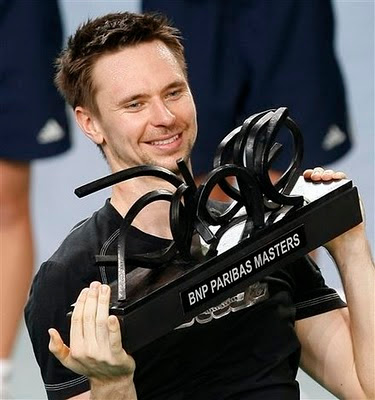 But yesterday wasn't a bad way to send off the regular season, as I'm sure Robin Soderling will attest to. He knocked off Gael Monfils in the finals in straights. I don't know if that epic with Roger Federer had any impact on La Monf's game, but you can't take anything away from Soderling's win. And to think, he's now in the top four, something I didn't really think would happen any time soon.

It's hard to say if he's had a better year than Andy Murray, who he leapfrogged over with just 20 points to spare in the rankings. They both made Slam finals, won a couple of titles and were generally threats throughout the season. You can also say the same about number-three player Novak Djokovic. Soderling's gaining on that spot, though, as well. And as he's one of the most dangerous players on tour indoors, who's to say where he'll be ranked after the World Tour Finals?

I guess we'll all see in a couple of weeks!

Hey everyone, sorry for the lack of posting: The past week has been a little hectic, to say the least. And sadly, I'm heading out of town for a funeral the next few days so I won't be able to do any posting over the weekend. I hope you've been enjoying the Paris tournament, though!

And while I hadn't posted about it here, you can catch the latest VANtage Point column, written by yours truly, at Down the Line!, where I wrapped up the year in Masters Series tournaments and previewed Paris. I picked Federer to win and I'm sticking to it!

Roger Federer and Andy Roddick: What maybe, might have, could have been 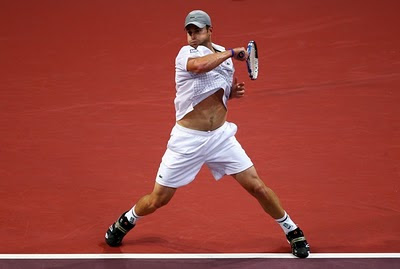 The semifinal lineup is set at the Swiss Indoors tournament with Novak Djokovic taking on unseeded countryman Viktor Troicki and in a marquee matchup, Andy Roddick vs. Roger Federer.

Well, actually, is it still "marquee"? It's funny to think that this used to be a contest tournament organizers and fans would dream about. A lot of people probably have forgotten that there was a period, however brief, that they were the top two players in the world. They haven't played since their epic match at Wimbledon last year in which Federer came out the winner--as he's done 19 of the 21 times they played.

That's a lot of times to lose to one dude. But I think you have to give Roddick a lot of credit because he put himself in a position to always challenge one of the best ever as most of their matches were in the later rounds of tournaments. And I can't help but wonder this: What if Roddick would've won, say six, more of their head-to-heads? Not even the ones in the Slam finals, but maybe those Aussie semis or those Masters series matches. Would that have helped spur belief in himself that he could be an all-time great and not suffered some of those horrible upsets he suffered in Majors?

Woulda, coulda, shoulda, I guess. This semi in Switzerland still has some luster to it, maybe not what it would have once upon a time, but it should still be a good one, regardless.

Hitting the home stretch hard on the ATP Tour 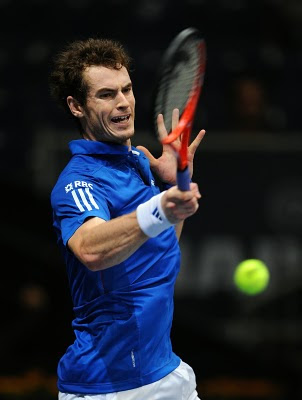 Looking at the draws of this week's stops in Valencia, Spain, and Basel, Switzerland, you can't help but think (or I can't, at least) that those draws are stacked! Sixteen of the top 20 were slated to play this week between the two events.

Aside from all the big names hitting these stops, I really like that they're full 32-player draws: I still haven't figured out why the ATP started doing those first-round byes for the top four seeds at some tournaments. Let everybody play all the rounds, I always say!

Anyway, I guess everybody's trying to squeeze in a last little bit of play before the end of the year and we get to start all over again in a matter of weeks. The fans in attendance are really lucky to catch players such as Roger Federer, Novak Djokovic and Andy Murray in action.

Well, it was good to see Murray before he got bounced out by Juan Monaco!