A tall order for Roger Federer? 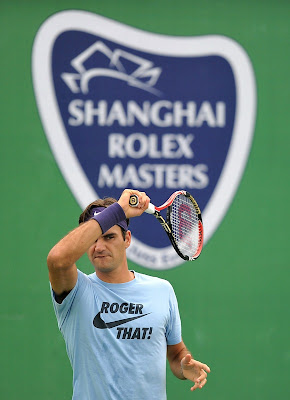 What do you think will happen in a mere matter of hours?

Roger Federer plays his first match in Shanghai against John Isner in the second round. This marks Fed's return to tournament play after his semi loss against Novak Djokovic. Now odds are Federer will win against a decent-in-form Isner, but like it was mentioned on Adjusting the Net the other day, he could be in for a bit of a surprise this tournament. And that brings up something I've been thinking about Federer the whole year.

To me, it seems like he's been in a perpetual state of rustiness. He loses a tournament then takes four to six weeks off. I know he's Roger Federer, one of the greatest athletes of all time, but I think getting out there and mixing it up more with these guys would help him maintain a little bit more sharpness. That way, he doesn't get cold-cocked when he returns to the court. Admit it: With all of his game and seemingly magical powers, would you be surprised if he lost to Isner first match out? Of course as an athlete gets older with more outside things going on, it gets harder to return to the grind. But the only way I see him getting 20 Slams is to get out there and play more. No one is going to hand him those extra Majors; he's gonna have to go out and take them, and re-establishing a semblance of that aura of invincibility is going to have to be done at the Tokyo's and L.A.'s of the world.

Didn't watch the match, but looks like according to the scoreline, Fed didn't have too many problems with Isner. I agree with your post that he can't just rely on being "Fed" to get him through early rounds anymore, but maybe he'll pull off his own "Shanghai Suprise" this year.

Meanwhile, too bad about Roddick getting injured again. Shanghai last year was an injury-fest too and I seem to remember those "rubber" courts being a large part of it.

Hey Erik, that is a rough break for Roddick. I wouldn't mind seeing him bounce back and hopefully qualify for the YEC.