Taking a bite out of Tokyo 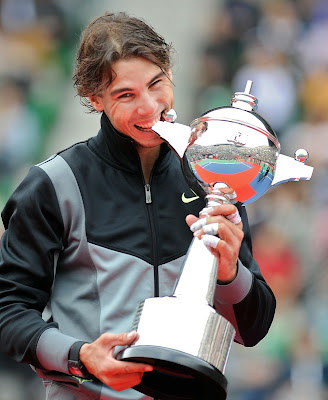 Wait, I thought Nikolay Davydenko was going to be the big winner at a tournament this past weekend! : )

Seriously, though, congrats to Rafael Nadal for being one of the title takers this weekend at the Japan Open. It would have been kind of weird if he had lost that semifinal match to Viktor Troicki: Weird would be the best word to describe it, right? I don't think you could have classified at as "bad" despite it possibly being his second semi loss in a row. With the year he's having you can't really say a loss is bad, just weird or unusual!

Anyway, it doesn't matter since he got through it and defeated a game Gael Monfils in the final. It was a little troubling to hear him say he's feeling tired from the long season afterward because there's still a few big events for him in '10.

TopSpin over at Tennis Is Served ... had an interesting post recently asking why Rafa was even playing in Thailand. I stuck up for the decision in the comments, saying at least he was honoring the commitment (or maybe commitment fee), but now I'm not so sure. I would love to see him cap off the year with a year-end championship; I just hope all the extra tennis doesn't catch up with him. Still, Tokyo's a nice place to win and congrats again to him!