The Stockholm Open: How 'Swede' it is once again 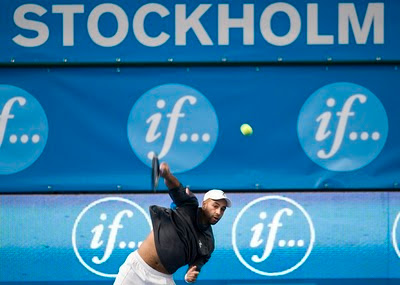 Year before last, I wrote a post lamenting the lack of luster around the Stockholm Open. This is one of the oldest tournaments on the calendar and it lost its elite status more than a decade ago. Sad, but things change: I mean, you have an outdoor tournament (Shanghai) as one of your premier fall events now. Why, back in my day, you never would've seen such a thing.

Anyway, let me get away from my old fogeyness and back to what I was saying: The Stockholm Open isn't what it used to be, but this year, things seem to be picking up as far as status goes.

It's amazing what a Roger Federer appearance in the draw can do for an event!

But it's been more than that: You have two-time champ James Blake showing some fight; Jarkko Nieminen continuing his run of good form, knocking off one of three top-10 players in the draw; and a quarterfinal between that Federer guy (who just played and won his 900th career match) and tough countryman Stanislas Wawrinka. All in all, not a bad week.

And while Stockholm's "Super 9" days may be behind it, here's hoping more good weeks are in store for the future.

From this year it's thomas Johansson and Jonas bjorkman that runs the show. Big difference! The tournament has changed in so many ways the last 12 months. As u write, it will be exciting what's going 2 happen in the future :)

Hey Johan. Hopefully those two can keep a good thing going there! It's nice to see an old tournament still attracting big names.

Nice post Van. I watched a bit of Sod/Mayer and then Fed/Stan today and was struck by the size and appreciation of the crowd along with the general quality of match play despite it being late in the season.

I think you are right to hope for a return of what used to be the indoor season which is now sort of broken up between now and some events in Jan/Feb after Australia. Hopefully with Fed/Sod playing this week it will return to some shade of it's former glory. It reminds me a bit of the event in L.A. which has a roll call of legends on its champions board but has lagged in recent years.

Who knows? A few years from now it could all change if the ATP shortens its season again. It's a shame the smaller events have to suffer as they are the "tour" much more so than the Slams.