Oh, Nikolay, why do we doubt you so? 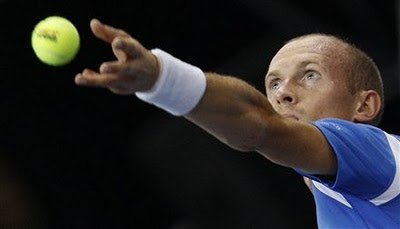 Nikolay Davydenko tagged Marin Cilic in straights in the China Open to advance to the quarterfinals. That's a pretty solid result for anyone to pull off (what's going on with Cilic anyway?), but one that shouldn't be totally unexpected from Davydenko.

However, if I were to say I wasn't shocked, I'd be lying to you.

Davydenko has been getting dusted on a regular basis for a few months now, ever since his return from injury. But for some reason, I just get this feeling he's really on the way back as opposed to that dreaded other direction you tend to think of with 29-year-old pro tennis players. After all, this is a guy who was taking out Roger Federer and Rafael Nadal less than a year ago. I guess he still has some play left in him.

We'll see how this week ends up, but if he was the last man standing, I wouldn't be surprised. Funny how a quarterfinal appearance in a tournament will change your mind!