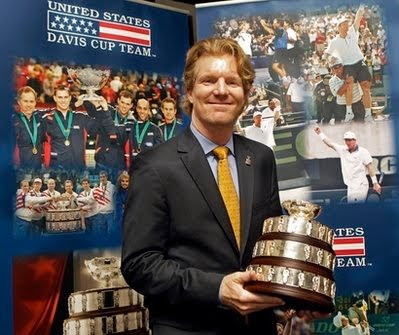 Jim Courier is among my top-three tennis players of all time.

Davis Cup is my favorite sporting event of all time.

So Courier being named captain of the U.S. squad is a pretty big deal for me! And I think it's a great choice by the USTA. He's a Hall of Famer that's won some big Davis Cup matches over the years and he knows how to find success on every surface, having made the finals at all four Slams in his career.

I also like the squad he's taking over from Patrick McEnroe with John Isner, Sam Querrey, Mardy Fish and the Bryan brothers leading the way. Isner and Querrey are perfectly poised to be brought along in Davis Cup just like Andy Roddick and James Blake were. Plus, who's to say what a youngster like Ryan Harrison will do in the next couple of years? He could be at a point where he's an entrenched top-tenner by then.

All in all, a good move by the USTA. And I'm happy for Davis Cup, too. It's been exciting to see such recent former players--like Patrick Rafter--take the helm for their home teams.

I am excited about Jim Courier also. I have always liked his commentary and also liked when he played. I think he will get the loyalty of the team.
It is refreshing to find someone else,like yourself, that likes Davis Cup. There is so much written against Davis Cup these days.

Thanks Sunny Nine! And you're right; it's always negative stuff being said about the scheduling or top players not caring. It's gone on this long and has seemed to do OK!