Is it Maria Kirilenko's time? 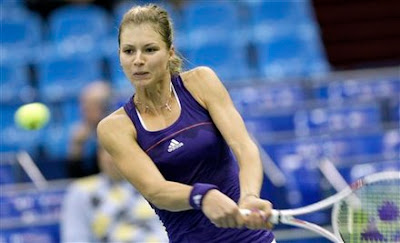 There were a lot of Russians in the quarters on the women's side of their "hometown" tournament, the Kremlin Cup. Two advanced to the semis: Maria Kirilenko and Vera Dushevina. Since I have Kirilenko's name in the headline and a picture of her, I think it's pretty clear I'm going to be talking about her this post!

I've always had a certain train of thought about her: It seemed like she was poised to add her name to the list of top Russian players, but for some reason or another, it never happened. Maybe it's the fact that she plays all those minor tournaments, which I've mentioned in the past don't exactly do her a world of good. She has won titles on tour, but not going up against the best in them doesn't really help her game develop. This year, though, she did make her first Slam quarterfinal and here she is, in the semis of a Premier event.

Kirilenko's still really young even though she's been out there forever. I can almost see her pulling off a Vera Zvonareva 2010 kind of run in the future. Doing well in big tournaments is definitely a start.