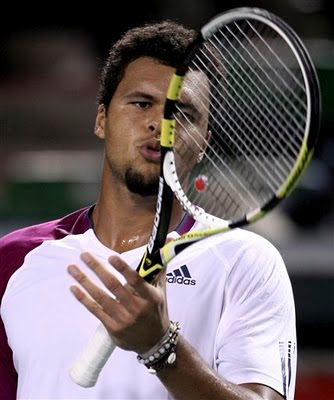 So a lot of our favorite players have lost in the past couple of days, huh, tennis fans?

Jo-Wilfried Tsonga, Maria Sharapova and Juan Martin del Potro have all been early-round casualties the past couple of days in Asia. For Tsonga, it's his first event in months, while del Potro is playing his second, both returning after injury-driven breaks. Sharapova's shoulder woes almost seem like an eon ago as she's been out there regularly competing. I'm lumping all three of them together, though, because while I'm a huge fan of all three, I just don't know why they made their comebacks when they did.

I've stated before how I didn't get Sharapova's return to action last year on clay, the toughest surface for her to play on. I think she's been a shell of herself ever since her return, even though I'm always hoping otherwise. With del Potro and Tsonga, why not wait until next year to get back out there? If Tsonga's trying to build up points to make the year-end championships, that wouldn't be a great move, playing in frantic mode and entering every tournament, increasing the odds of injury for an already very-injury-prone player.

As for del Potro, the end of the year event is light years away. Getting in (maybe) six matches before the season shuts down seems like a big gamble to me coming off a major injury.

I know there's a lot of thought otherwise out there on players' returning from injury, and it's good that these athletes want to get back out there. But tennis' offseason is so brief, why not use every opportunity to recover? And these three players that I mentioned are all young and successful, and have their whole careers ahead of them. I'm just asking for a little scheduling consideration to rest my nerves!

Completely agree that athletes in general succumb to an all-consuming itch to get out there as quickly as possible.

We don't need to enumerate how many times a durable, lasting recovery has been derailed in this way.

Although in Delpo's case I think he's simply trying to feel his way back into form - without over-exertion, without any pressure, nor with his sights set on qualifying for London.

I don't think he wants to go nto Melbourne next year stone cold either.

My question is more about what pressures are placed on these players from those who depend on them for their livelihoods (ie. sponsors) to get back out there? I agree that these athletes are likely the first to say "I'm ready to play", but perhaps there is nobody around to correct them - just a bunch of yes men who don't always have the athletes best interests in mind.

* Hey TopSpin, how are you? I see what you're saying about Delpo, but I wonder why not line up some exhibitions in the offseason, then play Hopman Cup before the Aussie next year? That gives you a chance to get some matches in in a relatively stress-free environment.

* Hey Vava, I wonder about that sometimes, too. Whenever I'm laid up with something, I can't wait to get back to hitting the courts. But it's not my livelihood, and it is for those guys. They should be more careful. That's Dr. Van talkin' for ya!