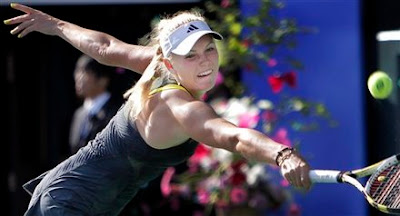 Caroline Wozniacki just won the tournament in Tokyo (her fifth title of the year) and now she's in China, where she's only a couple of match wins away from taking over the number-one spot from Serena Williams. Serena's had that position on lock for the year with her wins in Australia and at Wimbledon, and it's pretty hard to argue against her as the leader of the pack with two Slams won. But wow, she's only played six events this year!

Wozniacki's almost won that many tournaments, but none of them equal the two taken by Williams. She has played a lot, though, and has had decent runs at the Majors, but nary a Slam final was made by Wozniacki this season.

It's hard to say who really deserves the top spot more, but I'm going to do it anyway and give Wozniacki some props, albeit with a bit of reluctance. She's hitting the court on a regular basis and taking home the hardware, so it's difficult to argue against where she is. It's kind of funny, though, that the WTA could have four women over history that have become the top-ranked player without winning a Major: Amelie Mauresmo, Jelena Jankovic, Dinara Safina and potentially Wozniacki. But it's also kind of funny someone could be on top who's only played a total of nine weeks all year.

So if Wozniacki pulls off the feat this week and climbs atop the rankings mountain, then I guess she deserves it. I bet she'd trade it for one of those Slams Williams has, though.

Nice post Van on the "battle" for No. 1 although Serena isn't really on the court to defend her ranking. Despite all of Serena's injuries this year, I have to give Caro the nod since she's been winning consistently all year.

Just as FYI, you left out Ana Ivanovic who became No.1 in June '08 and then "fell apart" afterwards.

Hey Erik, thanks! Yeah, I left out Ivanovic because she became number one after the '08 French, which she won. She was guaranteed to become number one anyway just by making the final, but since she did capture the crown I figured I'd cut her some slack!

Good point Van but the question is will Wozniacki face the #1 no major curse. Like Safina and Jankovic who were both quality players when they reached #1 in the world but cracked under the pressure by not having won a major and now both have become irrelevant with some exception from JJ who remains in the top 5.

You forgot Clijsters in your list of women who were no 1 before winning a major. I believe she became no 1 in 2003 until Henin took over but her first major was in 2005.

You're totally right, Sunny Nine. Thanks, I forgot about that!