THAT'S what Davis Cup is all about! 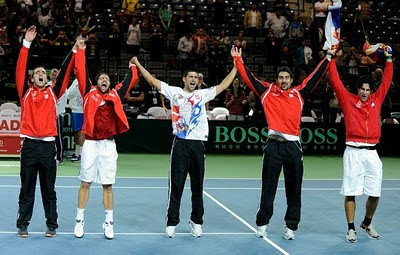 But you already knew that if you've been around this site before. However, after last year's final, for the first time, I started to have a little doubt about Davis Cup creep in. That tie between Spain and the Czech Republic was so bereft of drama that I barely tuned into it.

But this weekend, my friends, wiped out any and all concerns I had about my favorite sporting event. From the World Group semis to the playoff rounds, so many great stories happened:

* Serbia (yes, Serbia!) makes it to the finals of the Davis Cup. Now, the only person in the universe that had a right to say anything about the scheduling of the semifinals this year was Novak Djokovic, who was playing a Slam final less than a week ago. However, he comes out and wins the fourth rubber, which sets it up for his less-heralded teammate Janko Tipsarevic to clinch the tie. Awesome, awesome result for the tiny nation.

* France makes it to the final for the first time in eight years by steamrolling Argentina. I can't even believe it's been that long for the Frenchmen because with the talent captain Guy Forget can call upon, anyone would be hard-pressed going against them. Great win for the team.

* Mardy Fish--doing his best Pete Sampras circa 1995 against Russia impersonation--might be one of my favorite sports moments of the year. Fish's efforts in Colombia should not be overlooked in comparison to what he's pulled off this season. Two singles and one doubles win against solid top-70 players on their home turf in crazy conditions is amazing.

* India's comeback win over Brazil in the playoffs was huge. Mahesh Bhupathi and Leander Paes come together and spark the turnaround after a dismal first day in singles play for the home team.

* And last but not least, Kazakhstan will be playing in the World Group next year after blanking Switzerland. Talk about an incredible result! Now, Switzerland was playing without Roger Federer, but Stanislas Wawrinka is nothing to sneeze at. Andrey Golubev and Mikhail Kukushkin held strong, though.

A result like that shows you never know what's going to happen on a Davis Cup weekend. I hope we'll see more of those in the future, and that any talk of changing the format is tabled.

I got hooked on the Davis Cup last time watching Israel march to the semis, and this last week has been the best week since. Go Serbia!!!