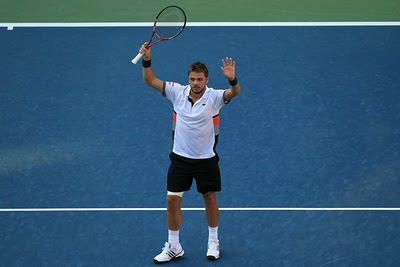 As I type this, Stan Wawrinka is battling it out against Mikhail Youzhny at Arthur Ashe stadium.

This is already the furthest Wawrinka's gotten at a Major, and I wonder if he has more in him to go even further. Slam quarters were supposed to be a given for Wawrinka, but for whatever reason it didn't happen. He has all kinds of game and has been in the top 10, but he also only has two career singles titles, when once it looked like he would've had a Novak Djokovic-type of career.

He has Peter Lundgren in his camp, and I think they both really need each other: Lundgren to show that just because he had one of the greatest players ever under his charge, he knows his X's and O's, and Wawrinka because it's good to have a guy that's seen everything.

I'm not sure how far he's going to go at the Open, but I hope it's only the start of more good things for him.