Rafael Nadal and the greatest men's Slam year EVER 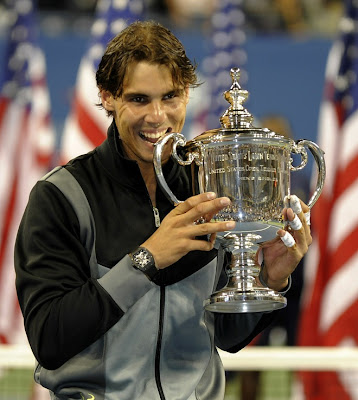 There, I said it.

I've been pondering that since he clinched the U.S. Open title over Novak Djokovic, adding his name to the short list of players with a career Slam and the even-shorter list of players with a career Golden Slam. It's obvious Rafa had an awesome year at the Majors, but the best ever? You're probably thinking, "Dudes win three Slams a year all the time. How many times has Roger Federer done it? Heck, Mats Wilander even did it." Or you might be saying, "What about the cats that made all four Slam finals in a year, like Fed, or the homeys that won all of them, like Rod Laver?"

Well, to answer all your questions, I'm going to break it down for you in just a few words:

It's all about the completely different surfaces he won on.

There are only five guys that have won Majors on three surfaces: Jimmy Connors, Wilander, Andre Agassi, Federer and now Nadal. Three of them have won three Slams in a year: Connors, Wilander and Federer. Connors' trifecta was achieved on grass back in 1974, while Wilander won on Rebound Ace, clay and hard courts in 1988 and Federer pulled that off for the first time in 2004. What knocks Wilander and Federer out of the running for me in this conversation is that Rebound Ace's properties were too similar to a hard court, albeit a slow one with higher bounces.

And I know Laver won all four in a year twice, which is a tremendous achievement, but to do that on only two surfaces kind of takes away some of the oomph of that for me. If Federer or Pete Sampras played three of their four Majors a year on grass, how many titles would they have?

It's been old hat the past few years for Federer to make all four Slam finals in a year, too, but you have to go back to that old adage (how many times do you get to read the word "adage?"), "No one remembers second place."

I'm not trying to diminish any of those great players' accomplishments at all. But what we witnessed in 2010 with Rafael Nadal dominating as usual on the clay of the French Open, coming back two weeks after that to take the grass-court title at Wimbledon and then winning on the hard stuff at the U.S. Open is an extremely rare feat in the men's game, one we might not see in a while. Unless he pulls it off again!

Went to bed at 4am....not regretting a minute of it!

I like how you've reduced the greatest of all time argument to the greatest mens slam year - not a discussion we normally hear.

Although correct me if I'm wrong but aren't both Rebound Ace and Plexicushion sufficiently slower than the Decoturf in use at the USO to be considered a different surface?

Hey TopSpin, it was a great one!

From what I gather, Rebound Ace played like a hard court with higher bounces and was a little sticky, too. I didn't think there was that much a difference compared to what Nadal just did, where there's no blurring at all: Those are three distinct surfaces. And from what I've read, Plexicushion is almost as close to Decoturf as it gets.

You forgot the most amazing part of Nadal's accomplishments: He came back twice this year from his chronic knee injuries to completely dominate the US Open while also developing a super serve. If that's not the greatest thing to ever happen in tennis, I don't know what is.

Actually, the fact the Nadal still plays after his injury plagued career is nothing short of miraculous.

A short history of Rafa’s injuries:

2004
Rising tennis star Rafael Nadal of Spain broke his left foot and will miss the French Open, Wimbledon and the Athens Olympics.
http://www.usatoday.com/sports/tennis/2004-04-22-roundup1_x.htm

2009:
“I have been playing with pain on my knees for some months now and I simply can’t go on like this.”
http://sports.espn.go.com/sports/tennis/news/story?id=4245078