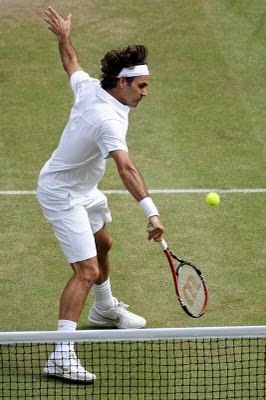 Well, first thing I probably wouldn't be doing is typing this blog entry: I'd be doing laps in my swimming pool filled with my millions!

Seriously, though, if I was him, you know what I would've done over the past couple of weeks? (And this may sound crazy) Played either in L.A. last week or Washington this one.

I know: Crazy, right? But not really if you look at it.

First, I know there have been some bouts with injuries this year, but his schedule's been pretty light. I'm assuming if he's about to play the two Masters events coming up, then he's in pretty good shape now. I don't think an extra week of tournament play would've hurt him.

And speaking of that extra week, for whatever reason the ATP's been doing this with it's 32-spot draws and awarding byes to the top four seeds, he only would have had to play four matches to win L.A. That tournament probably would've been best for him, actually, because it was a couple of weeks before the big ones start cranking up.

Then there's the confidence factor: January was a looonng time ago, which is the last time he won an event. Granted, it was a big one, but the months since then have been very un-Federer-like. I just have to assume L.A. would've been the perfect spot to break the title-less drought. A run to the finals even would've been decent: He doesn't even have that many runner-up finishes this year.

Also, if I was Federer, I wouldn't have brought in Paul Annacone on any kind of basis. All Annacone is going to have him do is try to get to net more. I should've typed that sentence earlier, I could've saved Roger possibly tens of thousands of dollars!

I don't know if you were doing much Pete Sampras watching back in the mid-to-late '90s, early 2000s, but Sampras' game changed completely. Pete wasn't simply a serve-and-volleyer, which he morphed into the later years. He was an all-court player that could hang with almost anyone out there on the baseline. If you get a chance, look at footage of him in the 1997 Australian Open finals, when he destroyed a young Carlos Moya. He was slugging it out with him from the back of the court.

You can say Sampras did alright in his career (that was an obvious understatement), but I feel that Annacone took him from the direction that Tim Gullickson was steering him in and actually cost him a couple of Slams.

Getting into net more would probably help Federer against those lumbering big boys like Tomas Berdych and Robin Soderling, but I just have this feeling that Rafael Nadal, Novak Djokovic and Andy Murray will eat him up if he starts increasing his approaches.

I guess we'll see what Federer has in store upon his return. I might would've done things differently over the past few weeks if I was him, though. But I'm obviously not, so let me return to my dreams of swimming in pools filled with dollar bills!

Agree with your analysis of Annacone's influence on Sampras.

I think I agree - an extra four matches wouldn't have hurt Federer and might actually have loosened him up ahead of CAnada.

Don't know as much about Annacone's philosophy as you - do you really believe he'll press Fed to come to the net? He sounds like he wants to do more work mentally.

who would you have suggested in place of Annacone? just curious.

Hey all, sorry I'm just now responding. It looks like Fed's been coming in a lot more his first two matches in Canada--to me at least.

And hey, Tennis Chick, hope all is well! I actually think the best fit for him would be Marin Cilic's coach, Bob Brett. I wrote this posting on it a while ago: