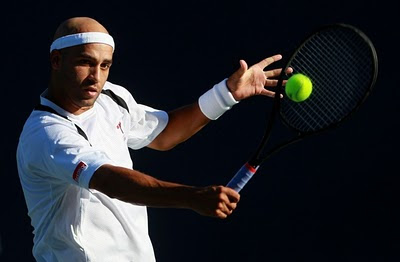 That was a tough loss for James Blake to Feliciano Lopez this evening in Los Angeles.

I assume, though, Blake must be thinking that a quarterfinal run at a tournament never felt so good. With his recent run of bad form, pretty much brought on by injury, the threat of the "R" word has popped up a lot coming from him in the past few months. He's definitely one of the veterans on tour now and his body has had some wear and tear put on it. But Blake's forehand and even-slightly diminished athleticism should be able to help him carry on for another year or two at least, provided the body holds up.

I've been a little tough on Blake over the years, mainly because I just wanted him to do even better than his stats indicated. I don't think the expectations were too high; he definitely was a threat to make a Slam final a few years ago, I feel. That time has pretty much come and gone, but he's still capable game-wise of making a run to the top 20, 25. Here's hoping the L.A. run has rejuvenated him.

Full Schedule On >> US Open Schedule