This is my brain on drugs 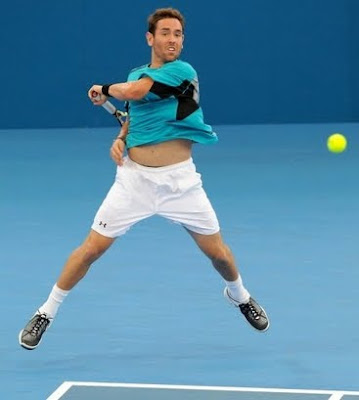 Before I get on to talking about the Monte Carlo Masters, I just thought I'd do a little reflecting on the U.S. Clay Court Championships in Houston, which ended with Sam Querrey falling in the finals to Juan Ignacio Chela.

Probably the biggest news of the event was Wayne Odesnik showing up there and advancing to the semifinals, despite the threat of what some might call (myself included) a well-deserved suspension for pleading guilty to smuggling human growth hormone into Australia at the beginning of the year. Querrey Tweeted before their semi that there was no way he was gonna lose to Odesnik. The match was pretty close before Sam pulled it out. Then he fell in three in the finals to Chela.

But I was thinking before that match that if he would've won, Querrey would've taken out two guys back-to-back that had been involved in drug controversies. Remember, Chela was suspended back in 2001 for a drug-related offense.

And here's another thing that caught my eye this morning on AOL's sport site FanHouse in a story written by Greg Couch: the fact that Odesnik beat Xavier Malisse in the quarters, who was almost suspended for failing to make his availability known for testing.

That's a lot of controversy in one tournament!

So this has me wondering, does tennis have a drug problem? It seems like the only mainstream coverage the sport gets is when something pops up related to that. If my opinion matters, I would answer that with a "no." Situations like that are evident in all walks of life. And I don't know if what has happened is enough to be considered a problem.

I do know that it's extremely disheartening for this fan to see, and players that cheat should receive as much punishment as possible from ATP and WTA officials. And I'm glad to see outrage from those with that hanging over their heads be the target of anger from their peers, as opposed to what goes on in other sports when other players are quick to give a "no comment" or laud that player's "accomplishments."

So, in other words, right on Sam! And remember players, just say no!

Nothing to do with Houston but what about Canas's first outing as coach being with Wayne Odesnik?

I don't think Tennis has a drug "problem" per say - more an anti-doping *authority* problem.

As outraged as everyone rightly is, the fact that Odesnik was allowed to play, shows something inherently wrong with the system

totally agree with both of you... I was really peeved to see Wayne playing as if nothing had happened. Right on Sammy!