Good win or a bad loss? 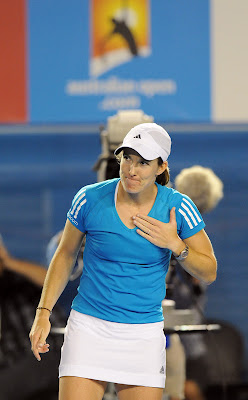 We're on day 3 of the Australian Open and something is sticking in my mind that I'm trying to figure out, and that's making sense of Justine Henin's win over Elena Dementieva.

Does it automatically mean that Henin will pick up right where she left off? Or does it mean that Dementieva, one of the longest-running top 10 members out there, just isn't in the same class as Henin? Will she never win a Slam? Is it like Tom Perotta said in the latest issue of Tennis magazine, that all of those players that have scaled some heights the past couple of years -- like Dinara Safina, Jelena Jankovic and Ana Ivanovic (who just lost in the second round to Gisela Dulko) will never see big-time success again? Are there really only five Slam contenders out there: the Williams sisters, Henin, Kim Clijsters and Maria Sharapova?

See? There's a lot on my mind after this one win -- or one loss!