Hey everyone! I just wanted to say what the headline up there says! I hope you're having a great time this season! -- Van

A year in review/preview 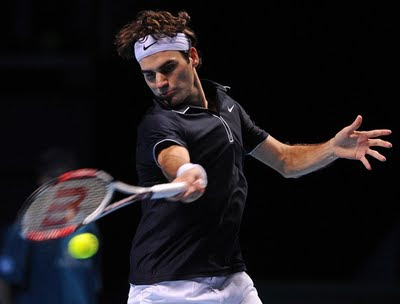 Roger Federer completed a career Slam and broke the singles titles in Majors record. Rafael Nadal won the Australian. Serena Williams won two Slams. Andy Murray got to 2 in the world. Andy Roddick lost an all-time match to Fed in the finals of Wimbledon. Spain won the Davis Cup and Italy the Fed Cup. Svetlana Kuznetsova finally won another Slam and Juan Martin del Potro picked up his first. Marat Safin and Amelie Mauresmo retired. Maria Sharapova made a comeback, and the king (or queen?) of comebacks was made by Kim Clijsters, who won her second career Major after being away from the game for a spell.

I wanted to switch it up from last year when I looked back on all the calls I made over the season— the good, the bad and the ugly—and offer a brief look back on '09, as well as give some predictions for 2010. Will they happen? I don't know, I'm not Nostradamus! But what would TTA? be without some calls, however outlandish, being made? Here's a few things that I think will happen in 2010:

• Justine Henin wins the French and finishes in the top 5 in the rankings.

• Kim Clijsters plays the barest minimum of tournaments and steps away again at the end of the year.

• Maria Sharapova will win a Major.

• Serena should grab a Slam or two as well: So I have her, Sharapova and Henin possibly accounting for all four Majors. If anyone else sneaks in and grabs one, I'm going to say Dinara Safina.

• On the men's side, watch for big moves from Marin Cilic, Jeremy Chardy and Horacio Zeballos.

• For the women, look out for Aravene Rezai, Alize Cornet and Sania Mirza.

• And your number ones at the end of 2010? Andy Murray and Serena Williams.

Bookmark this post to check back through the year to see how I make out!

Something you probably thought you'd never read at TTA? 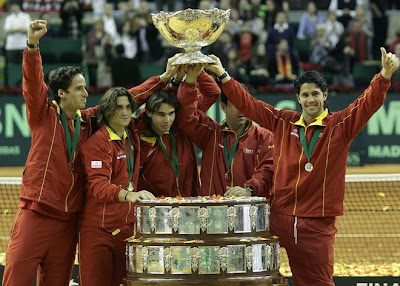 The Davis Cup final this weekend just didn't do it for me.

I imagine that must be pretty shocking for the people who've read TTA? over the past couple of years because I usually say it loud and proud how much of a Davis Cup fan I am. We're talking about setting alarm clocks early to catch rubber matches in far-off lands, calling out players who don't commit to playing for their team, the whole nine.

But for some reason, this finals weekend didn't hold as great appeal. Was it the fact that Spain was such an overwhelming favorite, despite its singles players being beat up? Was it the fact that the Czech team had a couple of flakes on it and watching them not step up wasn't going to make for must-see TV? I don't know. I have to acknowledge the David Ferrer-Radek Stepanek match was impressive, but should Ferrer have even been in that position where he had to rally? He's definitely the stronger clay-courter.

And I know Lukas Dlouhy had never played Davis Cup, but why do you hold a French Open doubles champ out of a tie when you have nothing to lose playing on clay?

I'm not going to be one calling for change to the format like everyone else does because it still is my favorite sporting event, and congrats to the Spanish team for going back-to-back with titles. It just wasn't a Davis Cup fave for me this weekend — and I really hope that's just an aberration.