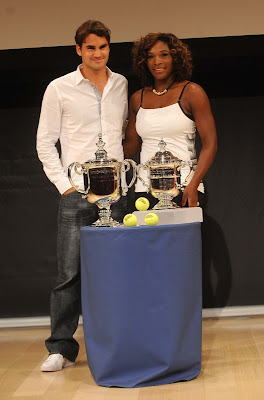 With the start of the Open mere minutes away, I guess I better hurry up and get my predictions up on the site! Basically, what I'm saying in the headline is that I expect last year's champs, Roger Federer and Serena Williams, to repeat. It's not that other players haven't been doing well this season. No, it's more of the fact that those two just know how to get it done come Slam-time. Their peers will really start putting chinks in their armor soon, but until then, I think they'll be able to continue their winning streaks in Slams.

But I don't want to just pick them and run! I like to make my predictions from the quarterfinals on, so here it goes. First up, the men:

And for the ladies:

Now, let me get ready to go camp out in front of the TV. Enjoy the first-day action!

The start (again?) of something big 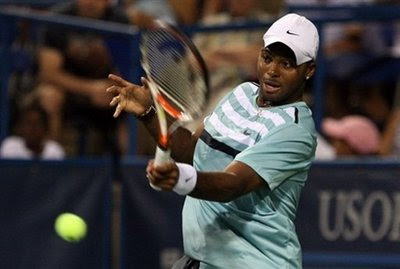 The start of the U.S. Open is mere hours away, but before I give my quarterfinal breakdowns for each draw, I just wanted to give a shout-out to the players that had to earn their way into the big dance by playing the qualifying tournaments.

There are two players, in particular, who I think deserve an extra mention, and that's Donald Young of the U.S. and Giovanni Lapentti of Ecuador. Great things were touted for these two, but they haven't come through yet.

Lapentti is the younger brother of ATP veteran Nicolas, who managed to crack the top 10 in the rankings. Their cousin is former Ecuadorean great Andres Gomez, who once referred to Giovanni as the more talented of the two. The younger Lapentti's ranking has topped out so far at 110, a far cry from the top, and it's hard to believe that he's getting as up there in age as he is, 26. Here's hoping the U.S. Open is a good tournament for him!

And the young Mr. Young: We all know the story on him, but I'm really hoping coming through the qualies here will help him at least get back to that top 100 territory he was in last year.

I've managed to catch both of them at the Open in years past: I saw Lapentti play a young Scotsman by the name of Andy Murray in the final round of qualifying, and I saw Young go up against none other than Novak Djokovic in the first round. Their accomplishments more than likely won't be as big as what their former opponents have achieved, but maybe this Open will offer a stepping-stone to some bigger things.

The curious case of Xavier Malisse 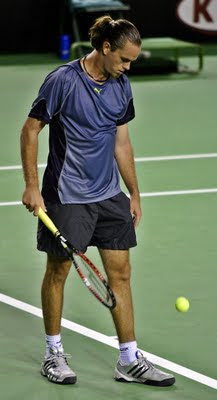 So, this week over on VANtage Point for Down the Line!, I decided to do a profile of the U.S. Open qualifying tournament. I was looking at the draws and both the men and women's sections are riddled with names any tennis fan would know: Vince Spadea, Nicole Vaidisova, Guillermo Canas, Kimiko Date Krumm … it goes on and on. And since I have his name up there in the headline, I'm sure you must know, Xavier Malisse was among the names, too!

Malisse has been playing qualies and Challengers all year, with some pretty tough results until his last two outings in Canada the past few weeks: winning in Granby and making the finals in Vancouver. It was back in the beginning of 2007 that he had the best stretch of his career, taking both the singles and doubles at two of his first three tournaments. Then he suffered a major wrist injury and only played a couple more events. In 2008, he only played a handful of events as well, but it looks like this year, he's giving it a full go and is starting to find some success.

What I'm kind of wondering about him, though, is why didn't he ever really break through? I remember waaay back in 1998 when he was 18 and had none other than Pete Sampras on the ropes in a match in Philadelphia. Usually, when you see a kid do something like that, they're destined for great things, but that didn't happen with the X-Man, who floundered for a few years and struggled with maturity issues until deciding to get serious in 2002. Back then, he made the semis at Wimbledon before losing to David Nalbandian in the famous "breathing problem" match. I figured he was destined for the top 10 at that point, but it just didn't happen. I wonder if 2007 would've been the year if not for the wrist? Still, '02 to '07 is a big gap for something not to have happened.

I've managed to catch Malisse out at the Open a couple of times, and he's one of those players that makes the game look really easy. He actually reminds me a little of Andy Murray with his ball-striking ability, but doesn't play defense as well as Murray. Talk about two careers going differently! For some reason, though, I don't think that had to be the case.

UPDATE: After writing this, I checked USOpen.org for the qualifying scores and saw he lost his first match to 78th-ranked Horacio Zeballos. Not a great finish to the Slam season, but I guess we'll see how the rest of the year goes.

What a difference a year makes 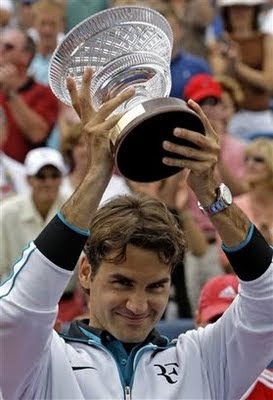 Congratulations to Roger Federer for winning in Cincy this past weekend. Knocking off two of his top three rivals pretty easily should bode well for the Open, I'd say!

The way things have gone for Federer since winning the U.S. Open last year, if we were to see something like that from him again, I would be shocked beyond belief. I think he'll win the Open again this year (I've been thinking that way for a couple of months now), and I can't wait to see what the next 12 months hold for him. We've been a witness to some pretty amazing things from him, but I think 2010 will be a sight to see!

Anyway, hat's off to him again for taking Cincinnati! 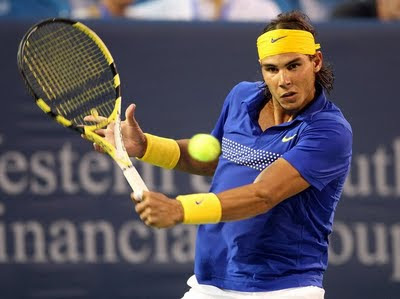 ... Then I would officially never leave the house!

I have to give major, MAJOR props to The Tennis Channel. The coverage of the Cincinnati stop has been topnotch. Hour upon hour of watching the top guys play has been great. This is what I thought was going to be the case with TTC every day when I signed up for it way back when. I've since learned that's not the case! I mean there's only so much "Destination Tennis" a guy can take!

But if I can get to see Novak Djokovic, Andy Murray and Rafael Nadal all in one day on occasion, I guess I can handle a "No Strings: Whips" every now and then!

Getting off Scot free? 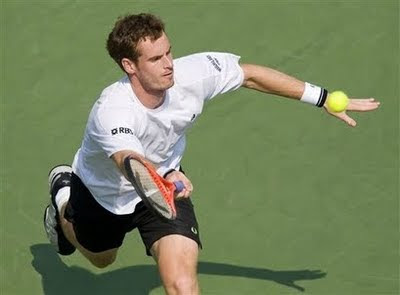 OK, so I've been pretty vocal about the women's rankings situation over the past few months with players who have never won a Major taking over the top spot. But while I've had some complaints about that, I've also recognized that the system awards the players who are posting the most consistent results as they are out there competing more. This has been one of the most dominant issues in the women's game lately. And it looks like the ATP is heading for a similar debate, too.

As we all know, Andy Murray broke the vice grip Roger Federer and Rafael Nadal have had on the top two spots last week by getting deep and eventually winning the Montreal tournament. Murray has been constantly racking up ATP 1000 titles like it's nobody's business. That's all fine and dandy as those are some of the biggest events on tour. But what about the true big daddies, the Slams? Not a Major has been won by Murray yet.

I know Nadal missed defending a lot of points this year, but shouldn't he have been far enough ahead still in the standings where he shouldn't have been overtaken at this time? After all, he did win a Slam this year, as well as some ATP 1000 titles.

This flipflop in the standings between Nadal and Murray kind of takes me back a little to 1993. Jim Courier won the Australian, then made the finals of the French and Wimbledon, plus won a couple of Super 9 titles (as they were called back then). Despite that, though, he finished at number three behind Pete Sampras and Michael Stich, who won six tournaments but didn't do anything of note Slam-wise that year.

I don't want it to sound like I'm belittling Murray's accomplishment because he has been very impressive. I just figured if there's going to be debate about the women's rankings (even if it's within myself), then this situation deserves it, too. And if the Majors are where success is most defined, it should be reflected even more in the standings.

There's a 'Point' to this

Hey everyone. I'm back from vacay, relaxed and recharged for more tennis talking. So recharged, in fact, that I'm even back to writing VANtage Point over at Down the Line!, so check out this week's edition!

No, there aren't any tournament stops there in the week ahead!

The family and I are heading to Maine for the week for vacation and my Internet access might be kind of sporadic. While I'm gone, be sure to check out the sites and blogs I have links to on the left of the screen, and enjoy the tournament action!

Talk tennis with you soon! 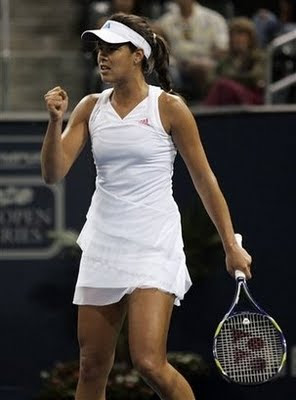 California has been quite the hotbed of activity on the WTA tour the past couple of weeks with super-strong draws at the first two stops in the U.S. Open Series.

Stanford last week had both Williams sisters and Elena Dementieva among the top talent going for the title (which was won by Marion Bartoli), while this week's L.A. event has five top 10 players competing, led by world number-one Dinara Safina. Vera Zvonareva's there, with Nadia Petrova and Victoria Azarenka among the players, too.

The round of 16 is nearly full, and I think there are a few interesting storylines going on out there:

• Can Ana Ivanovic show some kind of return to form?

• How will young guns Azarenka and Caroline Wozniacki make out?

GoToTennis is giving blow-by-blow accounts of the action there on its Twitter page if you want more of the scoop. I'm just going along for the ride!