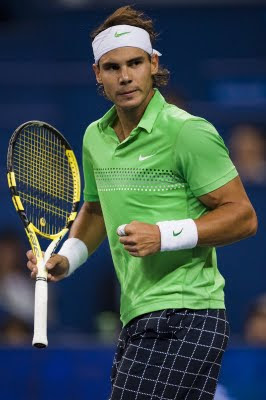 The quarters are set in Shanghai, but it seems like all the talk this week has been about injuries leading to match retirements and the big issue on players' minds: a longer offseason.

Scratch that: I meant on "some" players' minds. It's not everybody, but two of the game's big dawgs on the ATP Tour, Rafael Nadal and Andy Roddick, have made their thoughts known on the subject. But here's something I thought of that should be brought up: Why hasn't Novak Djokovic come out and said anything? That guy plays almost more than anyone and I can't recall him missing major time with an injury. Is it a matter of training better and more efficiently?

Or what about Robin Soderling? He's been out there chasing points like crazy and has been getting pretty deep in draws. I haven't heard him say anything.

But I'll take it out of the top 10: What about young up-and-comer Marin Cilic? He just had the biggest win of his career last week with beating Nadal. I've heard nary a peep from that camp.

And how about the journeyman? Take Robert Kendrick, for instance: He bounces between Challengers and main tour events all through the year. Guy probably can't get enough opportunities to play!

Now I'm not trying to make light of some players' concerns. I just don't see the need to reduce the season, and I don't know if this (possibly injury-prone?) contingent should be doing all this talking for its peers, especially when it seems a vast majority is doing OK with things as is.

I do think the season is both too long and intense (particularly around April-May), but agree with you about the lower ranked players and even guys like Djokovic not finding it a problem.

You could probably argue the lower ranked players don't reach the latter end of most tournies and so possibly don't tax their bodies as intensely. But it is also, as you suggest, a question of conditioning, being prone to injury and more demanding Nadal-like styles of play.

I just can't see anything changing that drastically anyway; tournament organisers/sponsors have too much to lose.

The tennis season is to freakin long. How many other sports have an 11 month season? THe paparazzi would appreciate it if tennis players took time off so they could capture more players in private scandals. The only thing the paparazzi catches them doing now is practicing....sad.

Hey there. Granted, the season does go on for 11 and a half out of 12 months, but it's not like guys are competing every week or every day. I know there were a lot of retirements this week in Shanghai, but I don't think it can be attributed to the length of the season; I think it was just guys catching bad breaks at the wrong time. At least I hope that's the case!