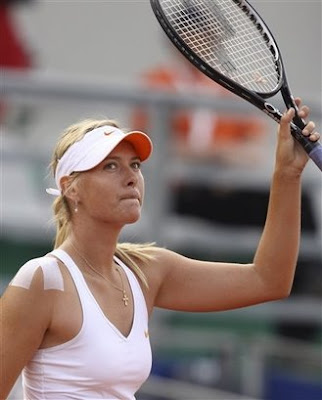 I figured I've filled up the comment fields at GoToTennis about this enough in the past few weeks: Now I need to go ahead and put something on my blog about it!

Maria Sharapova made her singles comeback today in Warsaw and managed to get through a three-setter against Tathiana Garbin. She came out smokin' in the first set, but had some rusty spots that led to the match being extended. Still, it was a good win for Sharapova and I'm glad to see her back as she's one of my favorite players on the WTA Tour.

But I think she should've just skipped the clay-court season!

That shoulder injury of hers was (or is?) obviously pretty serious, and I think clay is the worst surface for any kind of arm injury. I know the serve is the stroke most affected by that particular joint injury, but if you're out there hitting a lot more balls than you do on faster surfaces, then that's going to put some strain on the shoulder. Strain that's unnecessary to go through I feel.

I was saying this to Freakyfrites and the other GTT readers that to me, she should've looked at the clay like Patrick Rafter did toward the end of his career. It gets overlooked, but he was definitely a decent clay-court player during his peak years. After his shoulder injury, you rarely saw him playing on it as much those last couple of years he was on tour. And he went on to make back-to-back Wimbledon finals! Now, I wasn't in Rafter's camp at the time, so I don't know his exact train of thought, but it doesn't look like you can argue with whatever decision he made as far as scaling back his dirtballing went.

For Sharapova's sake, I'm glad there's only a couple of weeks left in this part of the season for her, and my concerns for her coming back now were probably deeper when she was talking about playing Rome and Madrid. I just hope she doesn't set herself back further when there was no need to come back now. But I guess that's what I like about Sharapova: All the off-court stuff is cool to her, but you just know she loves to be out there competing.

I just wish she would've waited till the grass-court season!

Hi Van! While I've enjoyed hearing about Maria S. playing in Warsaw this week, I've grown increasingly worried every match she plays. Don't know if it's just the fear of the unknown, or what. I'm still not convinced that she'll really be able to come back - on any surface.
Maybe it's the fact that she lost today to Bondarenko - I read that's who she injured her shoulder against in the first place. So maybe that's why I'm spooked.
Looking forward to the RG draw and reading your thoughts!

Hey Freakyfrites! I didn't know you were wondering about her being able to come back. She's so young, though. I hope she does, but if I were her, I'd never set foot on clay again! : )

And I'm about to put something up soon about the big one. I'll try not to make too many crazy predictions!