Nothing like Paris in the springtime (French Open quarterfinal predictions) 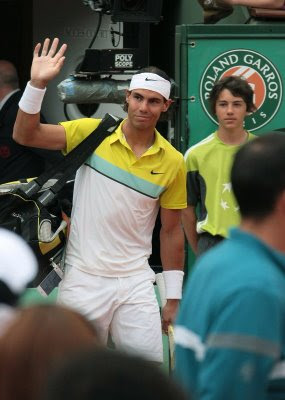 So I'm under the gun with this post because the start of the French is just a couple of hours away! I wanted to do a bigger posting of why I think certain things will shape my quarterfinal picks, but it's a little late (or early depending on your time zone: I'm looking at 2:30 a.m. here!) and I need to start thinking about bed time!

Well, you know what? I will share a couple of thoughts before I put up my calls for the tournament:

• I thought Novak Djokovic and Rafael Nadal would've ended up on the same side of the draw being ranked four and one, respectively. And here's the wild thing: I was all set to crown Djoko the champ! Once Rafa's in the finals it's a wrap; I think you'd have to get him before then and I thought Novak would've been the one to do it. Now I don't think it's going to happen and he'll add a fifth trophy to the mantelpiece.

• I'm not expecting much from Andy Murray. I know he had a couple of good results on clay the past few weeks, but I still don't think his game translates well to the surface.

• I also don't expect to see the Williams sisters in the second week as I think they both have too many decent dirtballers in their respective draws.

• Roger Federer's win in Madrid was great, but he also broke Nadal's clay-winning streak in Hamburg a couple of years ago, too, and still walked away with the runner-up plate in Paris.

There's plenty of other factors shaping these picks that I'll hopefully get to share with you, but for now, here it goes!:

For the quarters:
Rafael Nadal vs. Fernando Verdasco; Marin Cilic vs. Mikhail Youzhny; Juan Monaco vs. Novak Djokovic; and Roger Federer vs. Andy Roddick (yep, you read that right!)

For the semis:
Nadal over Cilic; Djokovic over Federer

For the finals:
Nadal over Djokovic

For the semis:
Safina over Lisicki; Kuznetsova over Jankovic

For the finals:
Safina over Kuznetsova

That's how I see it! I'll be back throughout the tournament with more musings!