In the driver's seat 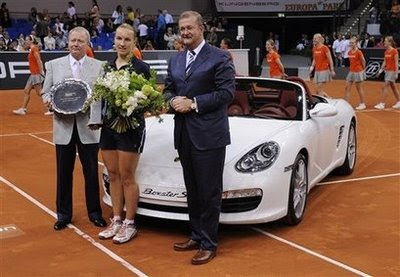 Rafael Nadal won his fourth Rome title yesterday with a straight-sets win over Novak Djokovic. That venue, like many other clay-court venues on the tour, has become Rafa's personal playground. To set the record for most title wins by a male at this prestigious event is really something.

All in all, I thought it was a good tournament to watch: Djoko looked really good out there, Juan Monaco had a nice run, there was an American sighting or two. All in all, not a bad one to watch.

On the WTA, Svetlana Kuznetsova FINALLY won a title by beating new world number one Dinara Safina pretty comfortably in Germany. Last I checked, Kuznetsova had lost like nine of her last 10 finals played, which is a remarkable statistic for someone of her ability. Glad to see her back in the winner's circle!

Well, I think you can probably guess how I feel about this win.

To think I was pretty close to giving up on her.

Loved the way she played the final too. Totally nonchalant, not even straining herself to go for the lines, yet still yanking Safina around the court.

One of my contenders for RG, which if the way Serena went out to Schnyder at Rome today is anything to go by, is wide open. I really believe ANYONE in the top ten could win it.

Yo, Van!
I really thought Kuznetsova was going to find a way to drop this one. I would love to see her do something big again. She's got too much talent. Guess we'll see in a couple weeks!