Three out of four ain't bad 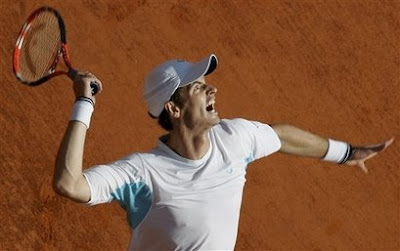 Now Rafael Nadal, I saw getting through to the semifinals in Monte Carlo. And while I didn't expect Novak Djokovic to beat Fernando Verdasoc, it doesn't really surprise me.

But Andy Murray making it through to the final four? It really surprised me!

Aside from Rafa taking the Aussie this year, it's been all Andy, all the time. And he deserved it, too, because it looks like he just worked extremely hard in the offseason to get to this point. I didn't think, though, that his team was going to have him so geared up for the clay season.

Let me ask you this: Can you imagine if he were to beat Nadal today? I think my head would literally explode: I wouldn't be able to handle the magnitude of it all!

The only one of the big four that didn't make it this far was Roger Federer, who lost to Stanislas Wawrinka, who's facing Djoko today. I know I wrote on GoToTennis' blog that Roger's in a good place—and I still believe that. However, I also feel losing to his homey Stan was bad. But who am I to judge?

Anyway, I'm gonna say we're looking at a Nadal-Djokovic final tomorrow. At least I hope: I really don't want my head to explode!

Hey Van. Don't worry, no need for your head to explode. Rafa is crushing Murray at the moment. Murray still has a long way before he can even think of beating Rafa on clay. The only way he can beat him right now, is if Rafa just doesn't show up!!

of COURSE Rafa is going to win!!! your head is safe.

Thanks Reem and Anonymous: I was kind of worried there!

Nadal is a clay machine! He's a machine on every surface now. I wonder if he'll ever lose on the stuff, though.