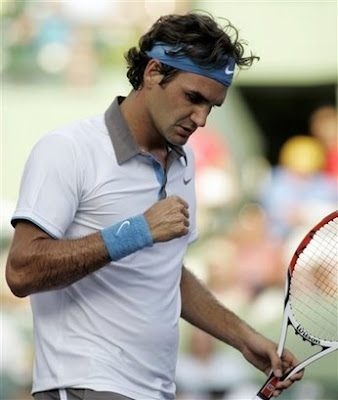 The men's quarterfinal lineup is set at the Sony Ericsson Open and it's about as good as it gets. Seven of the top eight seeds made it through, with the exception being Gilles Simon (it's hard to see him ranked ahead of Jo-Wilfried Tsonga).

I figured five of them would get through and was looking at Tsonga, Radek Stepanek and David Ferrer as my Cinderella stories. (Elite eight? Cinderella? There's been too much March Madness watching going on!) I still like my original calls of Rafael Nadal, Andy Murray, Roger Federer and Tsonga for the semis, but I think they should all be on guard because their respective upcoming opponents—Juan Martin del Potro, Fernando Verdasco, Andy Roddick and Novak Djokovic—are showing some real good form.

If I were in camps of the guys I picked against, here's what I'd tell them:

• For del Potro: Serve bombs up the T most of the time to Rafa and go down the line with your groundies. Just hit flat and all-out.

• For Verdasco: Keep him out there and use that big lefty forehand to yank Murray off the court.

ª For Roddick: Mix, mix, mix up the serve. What about an off-speed one down the middle on the deuce side? And I know he's been coming into the net more, but stay away unless it's on a floater.

• For Djokovic: Be the mover, not the movee. I don't think one of these guys really does anything better than the other: Novak just seems to get pushed around a little bit more. He needs to reverse that.

I don't think he's playing quite as well as he was in Melbourne but I like Verdascos chances against Murray.
Then again this will be a late match so the conditions shouldn't trouble Murray plus he seems to thrive in 3 setters.

Love the observation re Djoko needing to move Tsonga around more - that's a pretty big ask if Tsongas continually raining down bombs on you - but he should get his chances if he plays more aggressively than he has been recently.

Looks like you didn't underestimate del Potro like I did. The match isn't over by a long shot (even tho del P. just broke Rafa in the second set)but I honestly thought this quarterfinal would be a big-time dud.

Totally bummed Tsonga didn't get through. He played a crap match against Novak.

Hey, you two! It's definitely wild how all those matches went down. I didn't think that was going to actually be the case!