Where have you gone, Stefan and Boris? 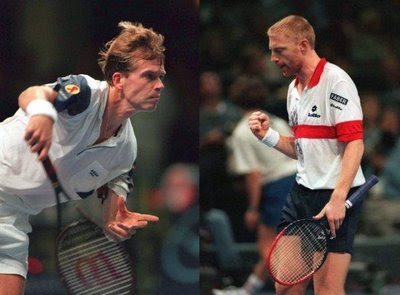 For the past few weeks, the Tennis Channel has been showing some classic Davis Cup matches, as well as highlights from last year's event, such as the U.S.-Spain semi and the Argentina-Spain final.

I've been checking out the matches when I can, or if I can't, I might DVR it if it's a good one. (DVR can be used as a verb nowadays, right?) Anyway, I got to record a match between Stefan Edberg and Boris Becker in the 1989 finals on Becker's home turf in Germany. "Boom Boom" blasted Edberg off the court in that match, weeks after losing to the Swede in the Masters finals.

Those two played a lot against each other over a stretch of a few years and were playing against each other in their second Davis Cup final in a row. Becker's team went back to back capturing the Cup in '88 and '89, But don't feel bad for Stefan: He's got his share of Cups, too.

But I have to tell you: If this week's Davis Cup lineups for Sweden and Germany are any indicators, I don't see those once-dominant nations pulling out many victory laps in the future. Those Cups they won in the '90s could be it for a while.

Did you see the lineup Mats Wilander (also a Davis Cup hero) is trotting out against Israel? It's pretty rough: He's counting on Thomas Johansson and Andreas Vinciguerra to lead the team in singles, both who are coming off pretty big injuries (which is nothing new for Andreas). Israel's definitely the favorite in my mind, believe it or not, with its team of journeymen led by Dudi Sela.

Germany is going up against Austria, and is starting Rainer Schuettler and Nicolas Kiefer. While those two may have been top tenners in the past, that's definitely in the rearview mirror. It'll be a dogfight, when in reality it shouldn't be.

It's something to see, watching a once-dominant nation fall off (speaking from experience as a Team USA fan!), but I guess those teams led by Edberg and Wilander and Becker set such a ridiculously high standard. Check this out, though: Between Germany and Sweden, since 1990, there have only been five Slams won by a player from either one of those countries on the men's side: two apiece by Edberg and Becker, and the Australian Open in 2002 by Johansson. That's some pretty low numbers counting the players from those countries that have reached the top 10, and even top five, over that time.

I guess it's tough to be playing in the shadows of two of the all-time greats. But you have to break out at some point.

Yep there's no denying it - both nations you mention have been out of it for a while now and it doesn't look promising, for the short term at least.

Tell you what though - I really think Haas could have been the saviour of German tennis, had he not had the injuries he did. I believe he got to #2 in the world, who knows - maybe there could have been a Slam in there somewhere. You've gotta think him capable of creating some waves with that backhand.

Hey TopSpin. Yeah, Haas probably should have at least made a final or two in his career. Injuries just really took their toll. But here's something, too: I wonder if he was a jack of all trades, but master of none in regard to surfaces. He could play really well on hard courts and Rebound Ace, but it always seemed like someone was going to be better than him. Also, he used to be pretty good on clay, but that seemed to go by the wayside later on. And his record at Wimbledon is pretty average despite having what looked like all the tools to succeed on grass.