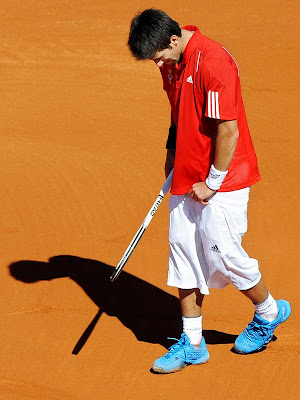 It waw a dark and dreary day here in Brooklyn-land today. Now, I'm just sitting at home pecking away on the computer, reminiscing about this past weekend's Davis Cup ties. I thought some players put in some pretty big performances, among them Rafael Nadal, Andy Roddick, Harel Levy, David Ferrer and Nicolas Kiefer.

However, I can't help but think of a few guys that really didn't step up, starting with the biggest of them all:

• Novak Djokovic: I'll give him this: He did just win a tournament on hard courts the week before, but to lose to the guy you just beat in that final, Ferrer, when you're a more-than capable clay-court player? No good, especially when you're the star of the team and its best hope to salvage something out of the tie. 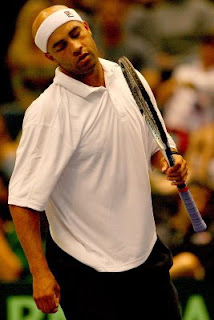 • James Blake: Now Stanislas Wawrinka is a tough player, but come on! That's a bad loss when you're playing at home and you're expected to be a solid contributor to the team. I can't think of the last time Blake had a quality win in a Davis Cup tie. I think you might be seeing a bit more of Mardy Fish in the future in that number-two spot if this keeps up.

• Jurgen Melzer: If you've never seen Melzer play, do yourself a favor and catch him if you get a chance because he has every shot in the book—the dude can flat-out ball. However, there's something not right there mentally with him. His loss against Philipp Kohlschreiber was the fifth time in his career he's been up two sets to none and lost. That's real bad.

• Mats Wilander: He's not on court playing, but when your guys lose five-setters like they did at home that's gotta be on the captain. You know what's sad about the state of the Swedish Davis Cup team? I bet old Mats can get out there and fight for a spot!

Nice post! I agree with all of your comments.

What about the French team? Maybe it's because I love all the players, but I think that Gilles Simon disappointed, big time, and that Michael Llodra and Gasquet should have won their doubles match. I also think that Guy Forget sucked it worse than Wilander. He has a ridiculous amount of talent to work with and has continually disappointed. Also want to note that Tsonga won both of his matches. . .

Hi Van.. How are you doin?!
I agree with freakyfrites.
You forgot to mention the Czech-France tie... Berdych and Stepanek did really well and Simon was a great disappointment. I didn't expect the Czechs to win that won.
But I think the French captain made the least he could have done with a very talented squad.

Totally agree. Guy Forget messed up, big time. However, the blame is on the boys, too. Of that insanely talented French squad, only Jo-Wilfried Tsonga delivered. That is really, really bad.

Hey everyone! I thought of including the French, but I almost feel that most of those guys are so unpredictable anyway that you never know what you're going to get. And I'm sure Forget probably feels the same way! I was giving Gilles a pass since it was his first weekend playing.