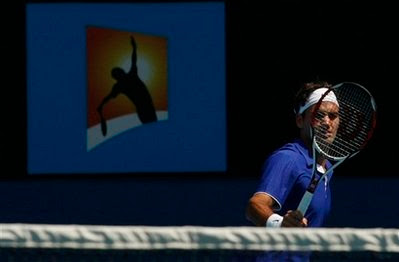 So how is the Australian shaping up so far for you?

It's going pretty good for me; I'm managing to squeeze some tennis-watching in in between new-dad duties, inauguration watching and the like. Most of my picks are still alive (Dagnabit, Radwanska! We're done, you and me!)

But what I'm really digging are the round of 32 matchups on the horizon. I remember way back when, when the ITF decided to seed 32 players instead of the traditional 16 at the Majors and I was like, "What the … ? They can't do that! It's always great to see a top guy or gal have the possibility of playing the 17th-ranked player in the first round! An upset waiting to happen!"

Now, I've completely gotten over that because you know when it gets to the third round, you're really going to see some good stuff. Take some of these matches, for instance:

• Roger Federer vs. Marat Safin: The most-anticipated match of the first week.

• Richard Gasquet vs. Fernando Gonzalez: Big forehand vs. big backhand: What more could you ask for?

• Marin Cilic vs. David Ferrer: Young gun going up against Mr. Steady: Who wins that one?

• Dinara Safina vs. Kaia Kanepi: Tell you what: Dinara really better be on her toes for this one.

These are just a few of the good ones on tap. So if you don't get to watch a Slam right from the get-go, just know that the 32s is where it really gets going!

Hi Van.. you're right! The third round has some great match-ups. Am reallyyyy lookin forward to Safin-Federer, I just hope Safin puts up a good fight.

I like how you described Gasquet vs Gonzalez... backhand vs forehand.. soo true...

Wawrinka vs Berdych should be interesting too...

Can you believe Venus lost?!?!

Those are all great matches, but I bet we won't see a couple of those in the US. Tonight, Fish plays at or around the same time as Federer/Safin. I hope they show us the latter match, but the way they have been just focused on Americans only...I'm a bit weary.

A friend of mine has DirecTV, and he gets 6-7 tennis channels. He never has a problem finding a good match. I think I'm going to change providers, as long as I can find someone with a 50 foot ladder to get to my roof to install the dish! :D

Man, what happened to Venus??? And does this mean you hand the title to Jankovic?

As a night owl, I love the Aussie Open schedule. I don't have to worry about avoiding the news during the day and I can watch live when I get home at night! If it goes too late, I just watch the rest of the matches on my DVR in the morning.

I'm so out of it - I didn't realize Gonzo and Gasquet were playing! That's going to be an awesome match. The Underachiever Special. Thanks for the tip.