From the sublime to the ridiculous: A different type of Year in Review, part 1 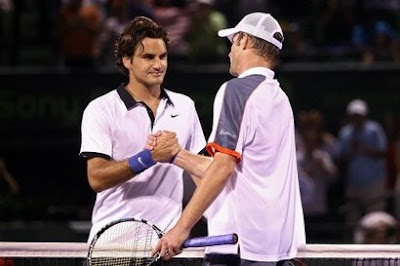 I was thinking of writing a "Year in Review"-type post, but after reading the one at GoToTennis and the series at Tennis is Served..., I decided against it because those have everything wrapped up in great, concise packages. However, I can't just let the past season go, so I'm going to do something a little different.

So I'm going to dig in the archives and do a little series on the predictions I made, both good and bad, over the year. Feel free to cringe along with me over some of the ridiculous calls!:

• "Watch Out for the Young Guns: The biggest tournament on the men's side was the one played in Doha, which was won by Andy Murray. If he stays healthy, watch out. I'm thinking he's going to be top 4 by the end of the year. ... Another young guy to watch out for is Jo-Wilfried Tsonga: That kid's a beast! If he stays healthy, too, look for him in the top 15 by the end of the year." (So what has the first week of the season shown us?, Jan. 6)

NOTE: Murray ended up at 4, while Tsonga ended up in the top 10.

• "Sister Sledgehammers: This is to Venus and Serena: Please, PLEASE stay on track this year! The winning weekends you had (Venus at an exhibition tournament, Serena at the Hopman Cup) could really bode well for the season ahead. … I'm picking you two to stay in the top 10, but just being there is not a true testament to your ability." (So what has the first week of the season shown us?, Jan. 6)

NOTE: They both went on to win Slams over the year and also picked up other big titles. Serena even got back to number one!

• "Finals:
Federer over Roddick: Another major final for Andy, another loss to Federer. R-Fed's getting closer to history!" (Aussie Open picks: The men's edition, Jan. 13) NOTE: Mono and Phillip Kohlschreiber messed this up for me!

• "Venus Williams vs. Eleni Daniilidou: ... Daniilidou has had a pretty good start to the year, winning a title already, and while I could never figure out why she hasn't put it together, maybe this year is the time she finally does, starting with taking out Ana Ivanovic in the second round." (Aussie Open picks: The women's edition (late!), Jan. 13)

NOTE: Who? Why, oh why, did I think this quarter was going to go down like that? Ivanovic ended up making the finals, while Daniilidou went on to ... pretty much nothing.

No posts or predictions were made! I guess I gave myself the month off!

• "Kevin Anderson vs. Novak Djokovic (3): Now you're probably thinking, "What kind of match can a qualifier give the hottest player on the planet?" Well, when you happen to serve bombs like Anderson does, have already played a few matches at the venue with qualifying and winning the first round, and recently coming off your first career final, your confidence should be pretty high. I still expect Djokovic to come through, but he definitely needs to be on guard." (It's tricky, tricky, tricky*, Friday, March 28)

NOTE: Anderson got the defending Miami champ, then promptly lost in the next round.

• "The Andys (Murray and Roddick) and Michael Llodra also have two titles each on the year. OK, I can see the Andys pulling that off, but Llodra? If Llodra kind of cuts back on the doubles playing, I can see him finishing in the top 20 by the end of the year." (Since I've been gone..., March 17)

NOTE: Llodra definitely ended up cooling off despite the hot start. I barely even remember him playing the rest of the year!

• "You know, why not tonight for Andy Roddick to break his losing streak against Roger Federer? If he protects his serve like he's never protected it before, get into some breakers, grab a mini-break or two in said breakers and who knows? Now's the time to do it. Roddick, 7-6 (6), 7-6 (4). That's my pick and I'm sticking to it!" (Why not tonight?, April 3)

NOTE: A-Rod broke his 50-match losing streak (it only seemed that long!), but then had a losing streak broken against him in the next round, falling to Nik Davydenko in the Miami semis.

• "Technically speaking, from a tennis standpoint, Blake should be able to beat Nadal pretty much any time they get on a fast surface, particularly hard courts. But Nadal is a first-ballot Hall-of-Famer and definitely won't go down without a fight, especially to someone who's had half the career he's had. Enough of the preludes: Here's how it will go down! I'm going with Blake on this one, but he has to do it quickly. He can't get into a third set with Nadal, because then it gets down to intangibles, where Blake definitely takes a backseat. ... It's all about matching up game against game, and his just doesn't go up against Blake's as well as it does others. So my scoreline on this match, 7-6, 6-2 for Blake." (Payback time, April 2)

NOTE: Nadal fought and came through in this one, then went on to make the finals in Miami. If Nadal EVER loses to Blake again, I'll eat my hat! (And for a personal note on how this match went, check out "Sometimes, it's all in your head.")

That's some of how the year went down in my eyes! There's more doozies (such as Maria Sharapova, French Open Champ!) to come!

Can't win'em all as the saying goes...

That said there were some great calls there - I would have never picked Anderson over Djokovic with the form the Serb was in. And as for A-Rod, well you've probably read my views on that win and coming right after beating up on almost everyone else in Dubai, I really thought he'd have a great Wimbledon - oh well.

I too think that Blake should have the upper hand against Nadal on a hard/indoor court - in fact up until recently, he did.

Oh and thanks for the shout!

Thanks for the props! You were charitable to call me "concise"!

I LOVE this post - what a great idea. So impressed by the Murray/Tsonga/Anderson predictions. It's fun when you see all the hours of tennis watching paying off - you're definitely an expert.

But still, sometimes tennis really does feel like betting on horseracing. No matter how much you know about the players history, opposing styles, physical condition, you just never know what will happen on any given day. These players are dang unpredictable (except for Nadal and until recently, Federer!)

Hey TopSpin and Freakyfrites; you're welcome on the shout-outs: I was more than happy to do it! Thank both of you for the props on my calls. They're hard to make but fun to do (if you're a tennis geek like me!)

Nice angle Van! I love self-deprecating stuff. Believe you me, I've had my share of doozies this year. Isn't that all part of the fun? Me thinks so.

PS - I wanted to ask you a question but couldn't find a way to contact you besides this one. Anyhoo, can you drop me a line at tips@downthelinetennis.com? Thanks!