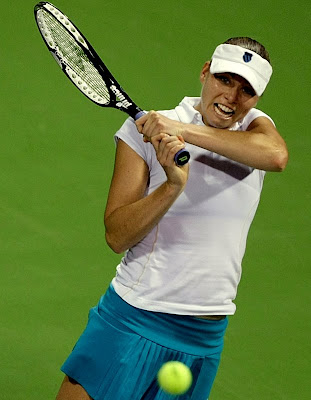 "You really can't say that every round-robin match could potentially be a classic, but I think this time, you can. (Except for, again, ones involving Zvonareva. Sorry, Vera!)" — again, Van Sias, Tennis Talk, Anyone?, Nov. 3, 2008

Yes, those words were written by yours truly just two days ago on the cusp of the championships—and in the same post, no less! I'm assuming what happened is that someone showed Zvonareva the post and she used it as bulletin-board material to get fired up for the tournament. (Yeah, right!)

Zvonareva beating Svetlana Kuznetsova in her first match up was really kind of shocking to me, despite Vera being in better form than Kuz pretty much all year. Part of me was thinking that Svetlana was going to turn it around here. Then, what she did today, knocking off Ana Ivanovic in three really blew me away. I thought that despite losing her first match to Jelena Jankovic, Ivanovic had been playing better lately than that rough patch she went through.

So now it's up to JJ to stop Zvonareva from going 3-0, something I didn't think was going to happen at all this tournament, much less from the last seeded player (who's thisclose to booking a spot in the semis, by the way).

It's always good to see talented players do good things at a big event, so keep it going, Vera. And if you need any more bulletin-board material in the future, Tennis Talk, Anyone? is always happy to oblige!

Can you do an article bashing Kuznetsova?

Ha! Hey Topspin, what's up? She did get a win today with Ivanovic withdrawing, I guess. : )

Seriously, though, I don't know what's going on with her. I really thought this tournament would've been a great place for her to bounce back.

Seems like the WTA top rank is very much opened for grab again early next year.

I am so impressed with Zvonareva. I had totally written this young lady off of my players to watch list. She was just so inconsistent and such a cry baby! Yes she had game, but she couldn't do a daggone thing with it.

But man has she happily proved me wrong! I have just been astounded at how in control of her game she has been as of late, and especially this week.

It's going to be a bang out tomorrow between her and Venus. I'll be front and center watching.