If I was Davis Cup captain for Argentina ... 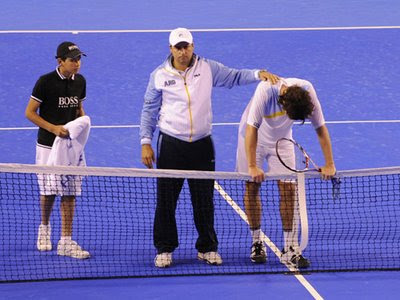 I might would've gone with Gus Calleri or Willie Canas out there over Jose Acasuso.

First, let me say congrats to the Spanish Davis Cup team for bringing home the title: The odds were as stacked against them as they can get, yet they came through playing in one of the toughest nations to play an away tie on tour.

However, I can't help but think that Alberto Mancini kind of blew it, and for that he's got to go. I made that call a couple of months ago and I'm sticking by it. Argentina's too stacked a nation not to have at least one title during his captaincy. They should be considered the Yankees of Davis Cup! Here's some things I saw that were kind of shaky going in and over the weekend.

• First of all, I wasn't too keen on their surface choice. David Nalbandian usually gets as hot as a player can get when there's a roof over his head, and he did his job here in the first match. But you have to realize Spain's just not a nation of dirtballers and has some guys that can play on fast surfaces, such as Feliciano Lopez.

• Secondly, it's always risky putting a kid out there to play against a guy that has no pressure on him whatsoever to win. I think that before he even got injured, Juan Martin del Potro was on his way to losing against Lopez. The circumstances of this reminded me of Pete Sampras making his Davis Cup debut in the finals back in 1991 and having to play a gimpy Henri Leconte. The free-swinging vet had nothing to worry about but hitting the ball and shocked Pete to submission.

• That said, there was a good chance of going into the day of doubles with a split. And the Argentineans were never a favorite for the dubs, as far as I was concerned. So why risk Nalbandian getting into a long match? Why not just throw your original lineup out there of Acasuso and Calleri? I'm sure they at least had been practicing more.

• And lastly, like I said at the top of this, I'm not sure I would have put Acasuso out there. His record in DC singles isn't that bad, but he had a rough match recently that left him in tears (I think it was against Safin?). That sticks with a guy. He fought against Fernando Verdasco, but don't let him get back on the horse in a final. Calleri's not the best fast court player out there, by any means, but last year I saw him bee-last Lleyton Hewitt off the court at the U.S. Open. You do that, you're definitely capable.

I hate to be calling for his dismissal since like I've said before, I was a fan of Alberto Mancini when he was a player (I had just started getting Tennis magazine when he won the Italian in '89 and had been playing for about a year at that point, man I'm old!). But he's just not getting it done as captain. There's a lot of former Argentinean players out there; give them a shot.

UPDATE: Mancini decided to step down after all. I think it's best, but if you believe stories like these, good luck to whoever's coming in next!

I'm was speechless when I knew the Spaniards won.

Perhaps Acasuso is their best hope to replace JMDP, based on ranking compared to Calleri and Canas.

Yeah, it's kind of hard to believe they pulled it off, but it's definitely well-deserved. They fought hard and it paid off.

I just don't know about Acasuso: It seems like he should've had a better career than he has.

Van!
I wonder if the Argentines have fitness issues. First, I still don't get how Del Potro hurts himself just running for a ball. Then there's Nalbandian's well-known struggles with injuries. And that stomach massage Acasuso got during his match was sort of disgusting. That is not the body of a fit tennis player, and if you're playing for your country, you might want to get fit.
Meanwhile, you have Nadal (who still has injury issues, Lopez and Verdasco, who are physical specimens. I've got to think that was a factor.

Hey Van - thanks for going so in depth on this.

I just read the reports about the Argentine drama a little earlier, and now I KNOW that this is all Mancini's fault. Allowing Nalbandian to go rogue and cuss out other players (and their dads!) shows a supreme lack of leadership and team discipline. The fact that the Spaniards could hear what was going on through the locker room walls must have given Verdasco and Co. a huge boost of confidence going into the final day.

So while I think the surface choice was ultimately the most practical selection with or without Nadal, and Acasuso a reasonable gamble, Mancini still failed miserably because he let his team disintegrate. That kind of damage may take years to repair.

Supposedly, Mancini was going to resign anyway after this one, despite the outcome. Perhaps he was already one foot out the door?

Re: Nalbie playing doubles - I can only assume that Mancini thought that with Nalbie being in such great form, he might have carried some of that momentum through to the doubles. If he'd delivered they would be playing the reverse singles with a 2-1 advantage and that might have affected Spanish morale.

As it turned out I don't think Nalbie played great doubles; to make matters worse I felt he was in Calleri's face a little too much; it's good for the stronger player to take the lead and prop their partner up, but if you become overbearing it can have the reverse effect as they wilt under the pressure of expectation.

• Hey Naf! Fitness could definitely be an issue. Plus, this is something I was thinking about: Isn't it wild how you see so many Argentineans go through hot streaks and then completely cool off? What's that all about?

• Hey Freakyfrites, what's up? That's a pretty rough situation I guess he was in. And with the way those players were acting, it must be a relief to get out of there!

• Hey TopSpin, how are you? I wonder if Nalbandian's the guy that's really the problem with that team? You're right; being too aggressive can have a detrimental effect.