David vs. the Goliath* 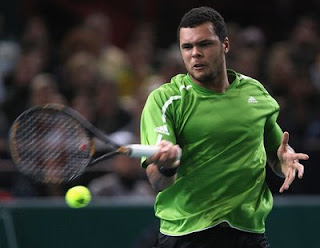 Well, it's all on the line tomorrow with David Nalbandian going against Jo-Wilifred Tsonga in the final of the Paris Open.

Aside from picking up more than 400 grand, the winner gets a ticket to Shanghai to boot. That's been the great thing about Paris over the past few years to me: It seems like those guys on the outside of the race usually are busting their hump trying to make it to the big dance. I remember a few years ago when Sebastian Grosjean had to win to get in and he pulled it off. Sometimes, too, players who you almost rule out of the running (or at least, I rule out!), such as Nalbandian and Jo-Willie get in the mix.

Tsonga's great and I really do like him a lot. I just hate that he took out two of my main guys—Andy Roddick and James Blake—to get this far. I was pulling for Andy to win a major title again, and I would've loved to see JB step it up and win his way in to the big dance but you can't have it all. Tsonga's totally deserving, though. 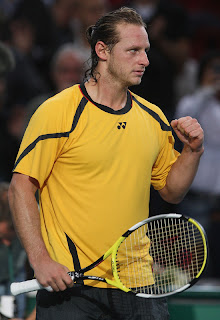 As for Nalbandian, what can you say about that guy? Can you believe what he's capable of? He was totally off my radar, then all of a sudden, he's handling two of the hottest players on tour (Juan Martin del Potro and Andy Murray) with hardly any difficulty at all, then dusting Nikolay Davydenko in the semis. He's had a great indoor season this year.

Tomorrow's final will definitely be a can't miss event. I think I'm going to pick Tsonga for this one: He brings a lot of heat, which doesn't really bother Nalbandian, but he has other tools that'll help him out (a solid net game, pretty good athleticism) which will help him out against the veteran. As I say that, watch Nalbandian beat him 1 and 2!

*(In case you're wondering, I'm referring to Tsonga as a goliath in the headline just because his game is so big and all. I should know this, though, that the first rule of headline writing is if you have to explain it, it's not a good one! However, I'm sticking with this!)

I think Tsonga can do it as well - he has the game to take out just about anyone, as we saw when he carved up Rafa in the semis of the Aussie Open. However, I think the scoreline will largely depend on which Nalbandian shows up. If GoodDave turns up, Tsonga can still win, but it will be much tighter. If it's LameDave... double bagel ahoy!

Hi there Van! I think Rafa and Roger's pullouts from Paris are blessings in disguise.

It gives opportunity for players like Tsonga and Dave to battle it out at this level to see who deserves to be in Shanghai more.

I'm really looking forward for this final match. My bet would be on Tsonga ;) But I'm not surprised if Dave retain his title here. He has always been good indoors.

Much as I would like to see Tsonga win his first Masters shield (I think he belongs on the top ten) Nalbandian is looking dangerously focused; my view is that Tsonga should try and dominate proceedings from the outset, using his intimidatory style of play to get inside Nalbandians head. If he can derail him early on, it might be difficult for Nalbie to get back into the match mentally.

Congrats to Jo-Willy! I knew he could do it. He just feeds off of crowd support. I hope he stays healthy in 2009. He is so fun to watch.

Hey everyone! It was great to see Tsonga pull it off. I hope he can keep on the path of performing well: It's just a matter of getting over the injury bug with him, I feel. He's good in every aspect of the game.

And can you imagine if David Nalbandian kept his focus for an entire year instead of during stretches? I'm sure he'd have a Slam by now.