How Swede it was 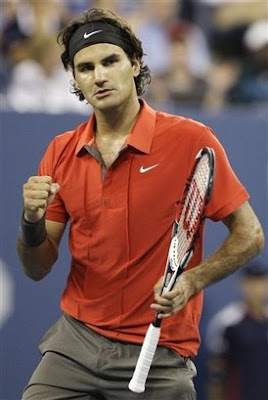 So, over there in my little "About Me" section, I mention how I've been playing and following tennis for 20 years now.

Over that time, I've (almost obsessively) observed the path of tournaments on both pro circuits: At one point, I used to know the winner and finalist of every Masters series tournament played in the '90s. (I guess I should remove "almost" from the "almost obsessively" phrase in the prior sentence!)

That being said, did you know that this week's Stockholm tournament was originally one of the "Super 9" tournaments as the ATP called them when it formed in 1990? It lost its Super 9 status to the tournament in Essen, Germany, which has since become the Madrid event kicking off next week.

If you were to look at the past champions during the Super 9 era, you'd be amazed at the Hall of Famers and potential ones on the list: Ashe, McEnroe, Borg, Becker, Edberg, Lendl, Wilander, Ivanisevic, Stich. However, as the tournament downgraded in status, the champion's roll call got a little shaky with Thomas Enqvist, Paradorn Srichaphan, Mardy Fish, Thomas Johansson, James Blake, Jonas Bjorkman and Ivo Karlovic among the winners. (Notice how I had to use their first names?)

It looked like, though, that the tournament had made a coup this year, with the big daddy, Roger Federer, expected to come in to town. However, we all know how that went. But, miracle of miracles, he's coming back next week to play in Madrid, refreshed after getting that extra week off.

Players bail on tournaments all the time, so what R-Fed did isn't unusual. I mean, Blake (a two-time champ) and Novak Djokovic pulled a no-show here, too. I guess as a sort of recent traditionalist, I feel bad for the tournament, which was one of the crown jewels of the indoor season not too long ago. And the fans, of course, as well. They're still getting to see some good tennis, but just imagine what they could have had: A return to the glory days, if only for one week.

I think so much of it has to due with the crazy length of the tour. Scheduling proper time off for players has always been an issue, and ATP has just sat idly by and twiddled it's thumbs.

Van, I also could have named all the tourneys and winners in the 90's! Sadly, though, now the tourney's change sponsors and cities every year, almost. US tv has stopped covering pretty much anything after the US Open. Sure, there will be the big 3 at the end of the season, but nothing else. I can recall a time when ESPN2 covered live tennis pretty much the entire months of October and November.

van its brian jordan what the hell is going on

van the site is great i am glad i know your out there...

That pun was brilliant. Worthy of me. Well done. :)

• Hey heyheyhey! Yeah, remember those glory days of watching indoor tennis every day? I miss that! To me, too, it seems like players are just playing less and I the main reason why is that they're practicing more because the game has gotten so physically demanding. Truth be told, I wouldn't mind seeing them cut down on some of the exhibitions, too, but that's another story!

• Brian Jordan! What's up? Daniel Prickett told me you were building him a tennis champ! I'm still at HFN magazine, and you can find me e-mail address on our site. Drop me a line there!