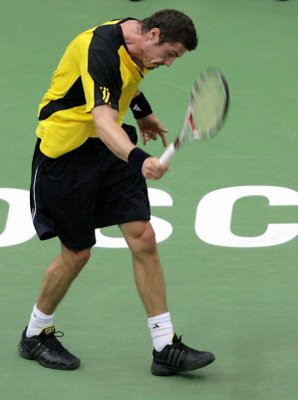 I mentioned earlier in my post about Donald Young that I was going to write about last weekend's results in the pro tournaments, which at two of them, could either be considered big upsets or par for the course.

First up, playing in his first tournament final in a couple of years, Marat Safin fell to countryman Igor Kunitsyn, who was only making his tour finals debut—against a former world number one, to boot. Then over in Vienna, super-talented Frenchman Gael Monfils, playing in his first tournament final of the year, lost to German Philipp Petzschner, who was also making his finals debut.

Seeing Safin and Monfils both fall to journeymen on the same weekend really put into light how frustrating these two can be. They're capable of beating almost anyone—and losing to anyone, too.

So because I just like to go with themes when I come up with them, I decided to make a list of the five players that make you want to bang your head against the wall when you hear some of their results because you know that despite what they've accomplished, so much more can or could've been done. The only thing consistent about them is their inconsistency! Some of these guys were on the TTA? Top 10 List, but this one is based on how crazy they drive me.

Here goes: Any guesses as to who will top the list? I'm counting down to the leader, so don't look ahead! And if someone I didn't list drives you crazy, feel free to list them. Tomorrow's the ladies' turn.

5. Andy Roddick: I'm a big A-Rod fan, but man, does he drive me crazy sometimes! I know expectations for him have been high from a lot of people, and you can't win every match, but still: Losses to Philipp Kohlschreiber and Janko Tipsarevic in Slams is nuts. I'll always root for him, but I just don't know what I'm going to get: except for a concussion one day for ramming my head into the wall one too many times!

4. David Nalbandian: Well, at least he won his tournament this weekend! But you just never know what you'll get with him: One tournament he's knocking off Rafael Nadal, Novak Djokovic and Roger Federer in a row, the next he's losing to Jeremy Chardy. He's the defending champ in Madrid and if he defends, OK; if he loses his first match, OK. I'm gonna pad the furniture just in case I feel like knocking my head against something!

3. James Blake: Let's take a look at this year, shall we? The former world number four has only made two finals in '08 and lost both of them: to Kei Nishikori in Delray Beach and Marcel Granollers in Houston. These losses might look OK in a couple of years if or when those two make it big, but for a top guy near his prime, they're pretty bad. Also, journeymen galore have made it to Slam semis, but Blake hasn't: a bad result for someone of his stature. 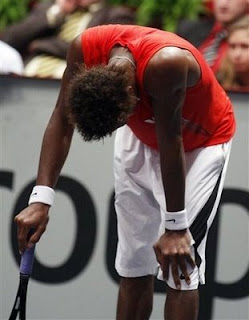 2. Monfils: Guys that almost win the Grand Slam in junior tennis shouldn't only have one career title playing with the big boys, but that's where Gael is. Making the finals in Vienna was a decent result, but losing to a 24-year-old just cracking the top 100 and playing in his first final almost negates that accomplishment. Watch Monfils win Madrid this week.

1. Safin: Come on, who else could it have been? I don't even know where to begin. Earlier in the year, after he made a couple of quarters on clay, I thought that could kickstart a run to the top 10 before the end of the year. Then, that Wimbledon run only confirmed it for me. But I guess I should have known. Well at least he got to a final, but I'm left with a lump on my forehead after banging it into a desk after seeing he lost! I'll learn one day!

To everything you said about Safin: word. I think I've probably killed half my brain cells after all the head-banging I did during and after the Kunitsyn final.

I'm with you guys on Safin. He's pretty much like Blake in my book -- if he's supposed to win, he won't.

Hey Jodi and Naf, what's up? I'm kind of tempted to stop following those guys: I don't know if it's worth the headaches, particularly with Safin! How does he lose that final? If Kunitsyn ever cracks the top 20, I'll be totally shocked.

Yeah, the Safin story is a sad one. Just recently I watched the 2000 USO final, he played so well. He could have dominated the men's tour before Federer. Instead of this he's gone into self-destruction...

I'd place Nalbandian in 2nd place - how he goes from his performance at last years indoor season to, well pretty much nowhere is beyond me.

I'd also have to put Gasquet ok that list at possibly number three - its a crime that he's only been past the 4th round of a slam once.

safin what a tool

• Hey Tennis Observer. Yeah, it's really kind of sad and ridiculous that he didn't win at least a couple of French Opens, another U.S. Open and two or three Aussies. I think he's pretty much done, but as I type that, watch him romp through the Australian next year!

• Topspin, I thought of putting Nalbandian higher, but the other ones just drive me more crazy! He has had some great results—and some pretty horrible ones, too.

• Hey Brian, what's up? Dude, Blake's career could've been way better. Aside from those two finals he lost this year, look at what else has happened this season: He lost to Nadal twice this year after having been 3-0 against him; and both of those matches he lost from winnable positions. In Rome, he lost to Stan Wawrinka after being up, blowing a good chance at playing a Rome final. He choked against Gonzo at the Olympics and blew his chance at getting a medal. He lost to Rainer Schuettler on grass weeks after dusting him on clay! If Gonzo can make a Slam final, there's no reason Blake shouldn't have been able to.

Safin will always hold the top spot on this list!

Safin is tooo frustrating but I still can't get myself to rule him out of any match. The fact that he could beat anyone on a good day, always makes me feel that this is the match it's all gonna turn around... of course he ends up losing and I retreat to banging my head against the wall like you Van. But still... I can never stop rooting for him.

Hey Reem, what's up? I had been keeping the faith with Safin for years, and I probably will still, too. But all I ask for him is just one title at this point! Just one!