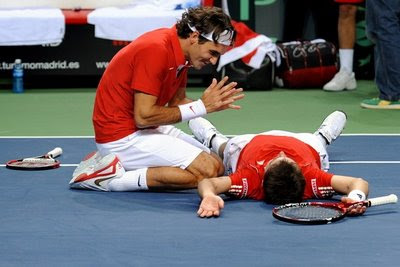 I promise this is my last Davis Cup-related post until the finals!

I just saw something that's kind of big: The matchups for next year have been released, and there's a pretty huge one that caught my eye. The U.S. team will be hosting the Swiss next year! I'm definitely holding off on making any bold, crazy, what-have-you predictions on that one because if Roger Federer plays, it could be a wrap. I mean, what surface would you choose to have a shot against him? Nails? The best chance would be if Stan Wawrinka got tight, but that's not entirely likely.

You can't even say the doubles point would be a given, because look what happened in the Olympics, where R-Fed and Stan (or Federinka, as I saw on GoToTennis!) took out the Bryans. Yeesh! Talk about tough matchups! This one worries me more than the one against Spain did, which wasn't due to Rafael Nadal, but was more about how I thought David Ferrer could be a weak link.

Speaking of Spain, their 2009 path won't exactly get off to a cakewalk-type start as they host Serbia, which will be probably be led by Novak Djokovic. Again, I'm pretty sure Rafa's going to be OK, but anybody else you name, you have to be concerned with them going against Djoko.

France plays the Czech Republic away, which can be a toss-up because both squads feature players you don't know what you're going to get from them: France could throw out Gael Monfils or Richard Gasquet and the CR will probably feature Tomas Berdych and Radek Stepanek: unpredictable, all.

Croatia hosts Chile and I'm pretty sure they're going to pick glass or something as fast and slick to play on to help its big servers. Russia's traveling to Romania, which should be a cakewalk for Nikolay Davydenko and the boys. Israel's going to Sweden, and I would assume the Swedes should be OK there, save for the doubles, where Israel's Jonathan Erlich and Andy Ram should be able to handle anything the hosts have to offer.

Argentina, which I guess never has to play an away tie again, it looks like, is hosting the Netherlands, which I think is even weaker than Romania as a World Group participant. If the Dutchmen take a set, I'd be highly surprised. And the final matchup has Austria against Germany, who's playing host. Germany is going to have to be careful as to which surface it picks. I think Jurgen Melzer's capable of beating any aging star (Tommy Haas, Nic Kiefer, Rainer Schuettler) Germany throws out, on any surface.

Again, sorry for the extra Davis Cup post. Just look at it this way: At least you won't have to read a preview here next year when the matches go down!

don't apologize! i love davis cup, enough with all this hating already. yes it's complicated and inconvenient, but there were some awesome matches last weekend. you can't beat that level of fan involvement. bring on the davis cup coverage!

Actually priceless moments like Roddick being cheered on by an all Spanish crowd in a Madrid bullfighting arena may make a Davis Cup believer of me yet!

This is the ONLY site where I see the 2009 schedule mentioned, which is definitely newsworthy. Keep those DC posts comin' Van!

My question is, how far down would they let the US go when, I mean if, they lose to Federinka next year? Would they let them fall out of the world group? I've never quite understood how that ranking system works for Davis Cup. It's waaaaaaaay too complicated for me.

I give you credit for still being able to give Davis Cup thought! I can't even think about it. It was so sad that I just had to let it go.

Although, I must say that prior to play, James Blake was receiving a lot of press flack about the team potentially being more successful without him...Funny, I haven't seen one word of such talk in the aftermath.

Van!
What on earth is Fed doing in that photo? That's what I want to know.
What did you think about that Italian player being banned for not playing Davis Cup?

Hey everyone, thanks for encouraging me to share my Davis Cup obsessiveness!

• Topspin, it was definitely a great setup Spain had, and it was good to see Roddick have fun with the crowd. You can't go wrong following DC!

• Hey heyheyhey! Yeah, if the U.S. loses, they'll find themselves in the same sitch that Switzerland was in, playing a qualifying match. If they were to lose the qualifying match, then they'd have to play at the Zonal level. It could possibly get pretty tough.

• Hey Sheila, you're right: I haven't seen anything like that either. I thought Querrey did do a good job given the circumstances, but James could've done just as well, if not better.

• Naf! I don't know what their little ritual means (it's the same one they did after winning the Gold), but I think it's so cool that Federer even does stuff like that! Those two could really be dangerous.

As far as Bollelli getting banned, I think it's pretty bogus. I would hope you wouldn't force somebody to play for you, and if not then penalize them. But I guess if you've helped that player all his career and he doesn't help you, then you stick it to him. Kind of a tough call. Too tough for me to make!