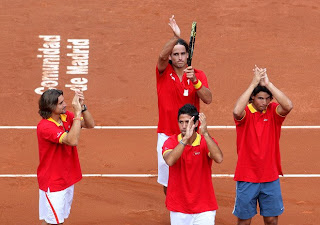 I'd still pick the U.S. for the upset over Spain!

I mean, ya gotta believe, right? Isn't that how the saying goes?

Anyway, I'd like to say congratulations to the Spanish Davis Cup team, which made it to the finals by beating the U.S. squad 4-1. Despite the scoreline, I don't think that's completely reflective of how things really went down in that tie. The stronger team did win, but I think there were some chinks in the armor. But if you can't capitalize on that, you find yourself heading home.

The U.S. team can take some positives from this, and I think the key thing is that the rotation just got a little deeper: If I'm Patrick McEnroe, I'd feel good about my team, as Mardy Fish and Sam Querrey performed better than anyone could have expected. I can't think of a tougher situation for those guys to be in, but they stepped up and played well.

It ended up being a little too much Rafael Nadal in the end, though? Is it even possible to beat him on clay? I thought the best shot would be to try and blast him off, but that's not the way to go about it, obviously!

Well, it was a great tie all-around with some great tennis, some heartbreak, some moments of joy: everything that makes Davis Cup the best thing going for me!

It was a nice try, Van. But unless Rafa loses an arm or leg in the next few years, nobody is going to beat him on clay.

It's all going to come down to doubs with Spain/Argentina. That's going to be one exciting final!

Hey there, Van! Heyx3 is right. Rafa is just too good on clay it's almost impossible to beat him.

From what I've have seen in the past 3 days, I think the Argentine ballers have a better chance to clinch the Davis Cup.

But as a Rafa fan ;) I would love to see Rafa have an excellent year.

rafa's passing shots against roddick were bananas. i kept thinking there was no way he could keep making those shots--but he did.

how sweet was it towards the end when roddick won over the spanish crowd?

• Hey Heyx3 (I had to take that from HCFoo!): It was a good effort, and you know what's scary like you mentioned? Rafa's going to be that good for years more to come. This is some year he's having!

• Hey HCFoo! How are you? I think you're right: You'd have to go with Argentina in the finals. Rafa's pretty much untouchable, but I don't know if he's going to have a strong enough supporting cast to win the other rubbers.

• Hi anonymous! Yeah, those passers were pretty crazy. And it was great when the crowd showed A-Rod some love!

>>Rafa's going to be that good for years more to come.<<

Unless he's injured. We can't rule that out. Those knees could give out at any point, and then, it will be much more difficult for him. But for right now...smooth sailing ahead.

>>how sweet was it towards the end when roddick won over the spanish crowd?<<

I loved them yelling, "Roddick"! That was so nice to see. I don't really like Andy (because he won't listen to me or anyone else who has tried to coach him through their television over the past few years ;D), but I like his personality. He was trying hard, but he knew the writing was on the wall, so he decided to be in the moment and have some fun.

Great site, you got yourself another subscriber! Any chance of a link swap with my tennis/betting blog?