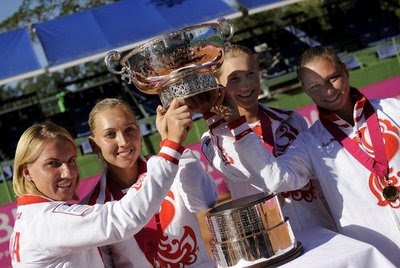 I've played tennis the majority of my life, and it's my number-one sport, obviously. But I've also always been a big team sports guy. Since I've lived in New York, I've embraced the concept of having local pro sports teams to root for, something that I missed out on growing up in Mobile, Ala.

Maybe that's why I'm such a big Davis Cup dude: It combines my favorite sport, which for the most part is considered an individual one, with the team aspect.

That being said, though, Fed Cup has never captivated me. I don't know if it's the format, which has changed a few times over the years, or the fact that it attracts so far fewer top players than Davis Cup does, with many of them bailing with injuries; or the weird scheduling … I don't know what it is. It's probably the most-ignored tennis event on my radar, sad to say.

Anyway, despite all that, I did happen to notice that Russia won its fourth Fed Cup title in five years today over Spain. Really, though, was there any doubt who would win that? Russia's so deep, it should only play Fed Cup matches against itself!

Congrats to those players that got this far and pulled it off. It means a lot, obviously, to the winners and is a great accomplishment. It's a shame it can't captivate other players—and me, too.

We're so on the same wave length, Van!

Although Fed Cup should be captivating - if the Williams sisters play, Ivanovic and Jankovic, Cornet and Mauresmo and Dechy. Their are some good teams, in theory. Maybe I'll try to watch next year. . .

Russia pulled that off with, like, their F team. They won without Sharapova, Dementieva and Safina, who are their top three. Fed Cup would be great, if only the WTA would remember it existed and gave it some kudos...

...though that's nothing compared to the utter bollocking the Hopman Cup gets. That could be one of the best tournaments of the year, if people would actually pay attention to it.

Hey FF and Jodi, you're both right. One day, they'll get it right!

And yeah, the Hopman Cup could be an amazing event that if planned right could maybe even attract casual fans, who want to see top players compete in mixed doubles. It totally gets overlooked, too.

I find it really difficult to care about either Davis or Fed Cup. It shouldn't be so but its difficult to have the same degree of emotional involvement without the top players.
Davis Cup does have the habit of throwing up the occasional classic (I remember a cracking Safin-Gasquet encounter 3 years ago) and you do sometimes
, it must be said, get a really electric atmosphere (Blake v Mathieu earlier this year was superb); but more often than not I feel as if I'm watching 2nd tier tennis.....just my two ha'pennies...:-)

Hey topspin, thanks for the comment. I think this weekend can be a really good one. I don't know, I really dig following the matches, even in Zonal competition. I think aside from the Slams, Davis Cup is really where you see guys lay it on the line. Also, there's a bit of a soap opera element sometimes, such as what happened with Richard Gasquet against the U.S. this year. There's something for everyone!

And ha'pennies are always welcome here!