An open letter to A-Rod 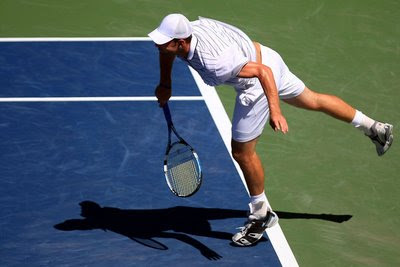 I know it's a long trip.

I know it's right before the U.S. Open.

I know there's warm-up tournaments right here in the U.S. of A.

But Andy, old chum, you should've gone to the Olympics.

Some might think that sounds kind of strange coming from me since after Wimbledon, I was practically begging Roger Federer to stay home. My thinking for him was that the Open should've been the priority after that tough loss to Rafael Nadal. However, losing to Gilles Simon and Ivo Karlovic over his next two tournaments might've been a blessing in disguise since he looks pretty rejuvenated so far in Beijing.

Anyway, when you said you weren't going to the Olympics, I didn't mind at the time because I thought that was a good move. But especially last week after getting blasted by Juan Del Potro in L.A., that couldn't be further from the truth.

After getting a first-round bye, you proceeded to blast through a few scrubs on your way to the final. Washington appears to be set up the same way with the only players that could pose a threat being Del Potro and Marat Safin.

Now, if you were in Beijing, you'd be going up against the guys that really are contenders for the Open, not players that are happy to just be playing an ATP-level tournament.

But this just reflects some issues I have about your career and have had in the past. Let me digress for a second to something that's really been bothering me:

What's up with that coaching situation? I have two words for you: Darren Cahill. I was a pretty vocal opponent of your Jimmy Connors dalliance and was real happy when that ended. But you need someone to get you back into the top five again, and unless you're gonna hook back up with Brad Gilbert, "Killer" is your man.

I read somewhere that Cahill told you to take the rest of the year off to work on your game, but there's no need for that: Just drag him out of the booth!

Let me tell you: First time I watched you play was years ago in Miami, you know the one where you beat Pete Sampras? Anyway, I said afterward: "That kid is the truth!" When I'm watching your matches, I still shout at the TV, "Come on, Truth!" Dude, you're still young but you gotta make some moves now. And maybe when 2012 rolls around, you'll be in London for the Olympics, ready to take on all comers.

I feel like Andy's tried so many things the past few seasons, and some things have helped a little and most have just seemed to help a little. Don't know what will stick. But Darren Cahill is definitely worth a try!

I always think Darren's a good option, though. I've been wanting him and Roger to hook up for years!

I'd like to see Andy working with Darren Cahill too or maybe with Andre Agassi for a few weeks.
It's a shame Andy got injured,he was doing well winning Dubai,beating Federer & he even made a run on clay!
I so hope things work out for him,i've always believed he will win another Slam.
I'd love him to come over here to the 2012 Olympics!
Hope he has a good run at the USO,lots of luck Andy.

go back to brad! i think i'm starting to stutter now...

• Hey Freakyfrites! Yeah, he definitely needs something. You know, I actually never thought of Cahill working with Federer, but that could be a pretty good match. I've had this idea that he should lure Bob Brett, Becker and Ivanisevic's old coach, away from Marin Cilic and work with him.

• Hey Marys, thanks for commenting! Picking Andre's brain would do him a world of good. He did have a good run early on and who knows? If he had gone on to win Miami and Rome (I thought he could've won), that could've made me think he was definitely on the right path.

I can't believe he hasn't picked up that second Slam yet, particularly in your neck of the woods!

didn't you steal this idea from naf's "tennis with attitude?

Hi Naffi's husband, welcome. Sorry for the confusion, I just looked on her blog and did a search on "open letter to A-Rod" and found a couple of items with that. I wasn't reading the blog then. Pure coincidence, and sorry for the mixup.

Ha ha! I swear, van, I didn't put him up to it!! Although I did write a few open letters to Andy, he's not responded yet. :(
However, of course, you're right. He's just going to regret this move for, oh, four years, when he's too old to do any damage.