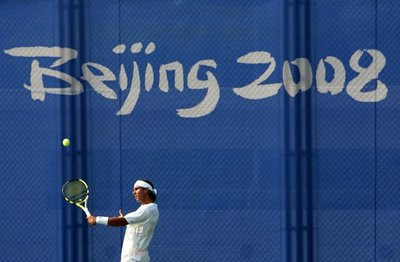 Those are a few of the less-heralded men's singles players that have won Olympic medals in tennis over the years, in competitions that have had Pete Sampras, Jim Courier, Roger Federer, Marat Safin and Andy Roddick among them.

In other words, you really don't know what's going to happen on the biggest world stage of them all. (If you were to say you picked Nicholas Massu to take the Gold in '04, then they should start calling you Nostradamus!) And this year looks to be the toughest Olympics ever.

But I'm going to give it a go with my quarterfinal breakdown I usually reserve for the Slams. I think there'll be six players under the age of 23 to make the quarters, which is pretty remarkable: that is, if it happens, of course!

Anyway, on to the predictions!

Roger Federer (1) vs. James Blake (8): I'm not going to go into any details because it's been the biggest story of the year, but everyone knows Federer is struggling. Right off the bat, he has to go against big-banger Dmitry Tursunov. I'm expecting him to get revenge on Tomas Berdych in the round of 16 for that Olympic loss last go-around. Blake's draw is definitely tricky, too, because he could possibly face Gilles Simon or Robin Soderling in the 16's. A lot of times, I think Blake's ripe for an upset, but not here. However, facing a (what-I'm-assuming-to-be) rejuvenated Federer will be it for him.

Ernests Gulbis vs. Marin Cilic: Gulbis plays Nikolay Davydenko in the first round, which I'm thinking will be the first big upset of the Games. Cilic is in the same section of the draw with five-seed David Ferrer, who might even go out in the first round to Janko Tipsarevic, and Fernando Gonzalez. But I think that will be the kid's first upset, taking out Gonzo in the second. I like Ernie in this one; he just loves playing on a world stage.

Gael Monfils vs. Novak Djokovic (3): Monfils hasn't done anything since the French, but his path up to the 16's is so winnable, that he should be able to get through on ability alone. Djoko should have no worries up to this match, and he should be able to handle Monfils, too.

Andy Murray (8) vs. Rafael Nadal (2): Murray's pretty much been one of the players of the summer, but so has soon-to-be number one Nadal. As much as Murray's gotten better, I still don't think he can handle the sheer brutalilty (how's that for a description?) of Nadal's game. Too bad, because I think Murray deserves a medal: maybe in '12?

Lot of kids in that lineup there! Here's what I think will happen going forward:

Federer over Gulbis: Gulbis has made amazing strides this year and I bet will make even more before the year's out (he has to because at the beginning of the year, I said he would end '08 in the top 15!), but R-Fed should be able to take him.

Nadal over Djokovic: With Nadal getting to number one, at least they won't be playing at this stage for a little while at least in the big events. Nadal sends him off with one last beatdown to make up for that recent Cincy loss.

In the Bronze medal match:

In the Gold medal match (I think this is the first time I've ever said it):

Nadal over Federer: If Federer has trouble with Nadal on grass now, what's he going to do on hard courts? Nadal's really on the verge of doing even more special things in his career.

I'm very glad you picked my two favourite young kids to make it to the quarters - Gulbis and Cilic are my pick there too!

I'm picking Federer to win the gold, but largely for sentimental reasons. I think it depends how he handles it mentally. He has the game to beat Rafa - he's always had the game. He just has to wrap his head around that.

Hey Jodi, I couldn't leave out the "Stars of the Future"!

I agree with you about Roger; I just don't know if he's ready to get Nadal right now.